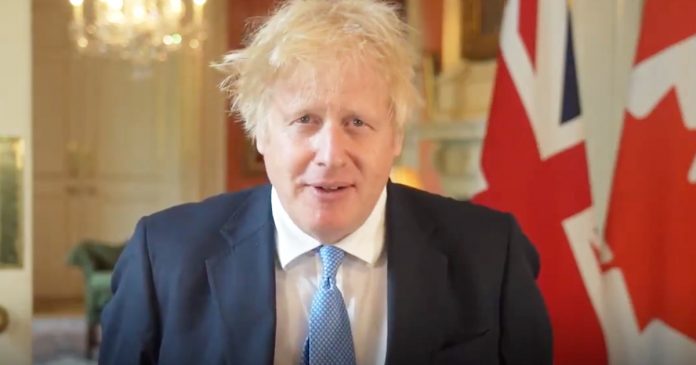 British Prime Minister Boris Johnson is calling on Canada and Britain to ramp up their efforts in the fight against climate change, green development, and promoting human rights around the world.

In a Canada Day video posted to Twitter, Johnson lauded Canada’s and the United Kingdom’s close ties before turning to global challenges he sees the two countries as being well suited to tackle together.

“We cherish the same freedoms, we stand for the same ideals, and by and large we believe in the same causes,” Johnson said. So let’s work together even more intensely to build back better after COVID, protect our planet from climate change, promote clean and green development around the world, achieve a fantastic new free trade agreement as swiftly as possible, make sure that we do that deal on cheese, and stand up for freedom, democracy and human rights wherever they’re threatened.”

Johnson said Canada is the only country in the world that sits alongside the United Kingdom in the G7, G20, NATO, Commonwealth, and the Five Eyes intelligence alliance, adding that “family” is a more appropriate descriptor than “friend” or “ally.”

Prime Minister Justin Trudeau has, himself, often used the “build back better” line, a United Nations mantra which has become a common refrain from global leaders in the course of the COVID-19 pandemic.

At the June G7 meeting in Cornwall, hosted by the United Kingdom, leaders committed to a global infrastructure plan they called Build Back Better World.

Trudeau and Johnson had a bilateral meeting at the G7 conference in which they “discussed taking bold action on climate change in the lead-up to COP26, including the international transition away from coal,” according to a readout from Trudeau’s office.

COP26 will bring tens of thousands of delegates from governments and non-governmental organizations to Scotland in November to finalize the rules of the Paris Agreement and “accelerate action to tackle the climate crisis.”

While Canada has not announced its plans for COP26, which starts November 1, the country is expected to send a large contingent given the Trudeau government’s previous commitment to fulfilling the Paris agreement.

Because the bill sets statutory targets rather than a specific plan to meet them, it has been criticized for its potential to unleash an untold economic toll.

“We don’t know the decarbonization plan. We don’t know the cost of various decarbonization options, nor the technologies required to achieve them,” Macdonald-Laurier Institute senior fellow Jack Mintz wrote last year. “If other countries fail to achieve the same objective despite their ‘commitments,’ we could incur considerable economic loss with little benefit in reducing climate change threats.”