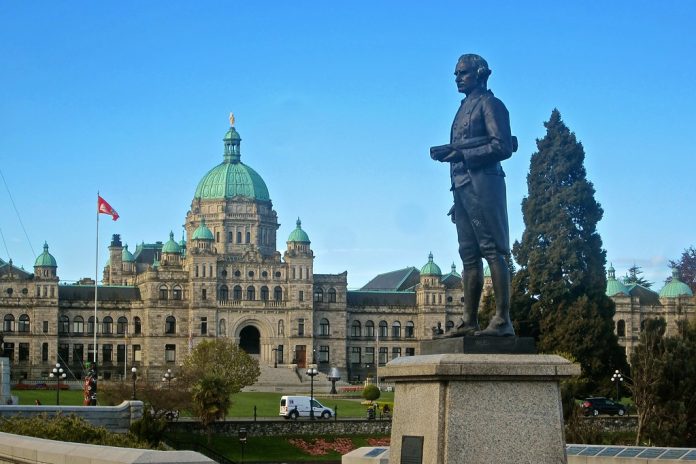 The Victoria Police Department (VicPD) is seeking two suspects believed to be involved in toppling the statue of famous explorer Captain James Cook.

Activists in downtown Victoria, BC pulled the statue down at around 8:30pm on Canada Day.  A large group formed around the statue before it was forcibly removed from its pedestal and thrown into the Salish Sea.

Eventually the monument was replaced with red wooden dresses, a symbol of the Missing and Murdered Indigenous Women human rights issue.

“Safe, peaceful and lawful protests are permitted under the Canadian Charter of Rights and Freedoms. Property damage is not,” VicPD said in a statement on the incident.

VicPD have released two photographs of the suspects involved. Both of the suspects are pictured wearing masks. One of them can be seen wearing a grey hoodie and hat while the other donned a backwards-facing baseball cap, sunglasses and an orange t-shirt.

The Captain James Cook statue is the latest casualty in an ongoing campaign to eradicate symbols and figures believed to be associated with Canada’s allegedly racist past.

Since the announcement by the Cowessess First Nation and Tk̓emlúps te Secwépemc First Nation of two burial sites at former residential schools in Saskatchewan and British Columbia, respectively, dozens of statues and churches have been targeted by vandals across Canada.

In the last few weeks, at least nine churches have been razed to the ground under suspicious circumstances while dozens more have been targeted with vandalism.

Captain James Cook, an accomplished 18th century British navigator, was primarily responsible for mapping the coast of Newfoundland and was the first to explore the Pacific coast of North America. Captain Cook did not play a role in Canada’s residential school system, which was first established nearly a century after he died.