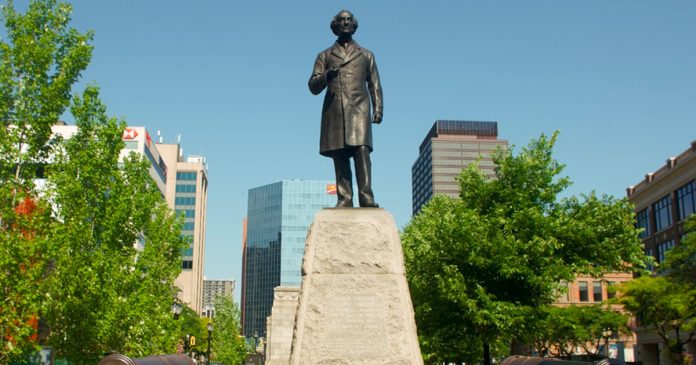 Following a push to remove a statue of Sir John A Macdonald from Hamilton’s Gore Park, the city now wants to undergo a historical review of all landmarks that are found to be “triggering.”

The recommendation for a historical review comes from a report authored by city staff from Hamilton’s Health and Safe Communities Department, the Planning and Economic Development Department and the Public Works Department. The report will be presented to Hamilton’s Emergency and Community Services Committee on July 8, 2021.

The report calls on staff to “undertake a Historical Review of City of Hamilton owned landmarks, including park and street names, to determine opportunities to honour the Indigenous community…”

An estimated $75,000 will be set aside to conduct the initial review, however, report authors note that should the City decide to follow through with making changes the costs could be substantially larger.

Funds for the project are to be taken from the city’s Tax Stabilization Reserve which was created to “offset extraordinary and unforeseen expenditures, to fund one-time expenditures, to offset revenue shortfalls and to provide for various contingent and potential future liabilities.”

According to the report, part of the historical review will include identifying specific landmarks “that are triggering in nature towards Indigenous people” and to find opportunities to broaden Indigenous representation in Hamilton’s public spaces.

“Through the Historical Review, staff will engage with the Indigenous community and the broader community in order to inform short and long-term opportunities to respectfully and meaningfully address both Indigenous and historical landmarks,” the report notes.

“This may include the addition of new landmarks and/or the moving or removal of, the re-interpretation of, and/or the renaming of landmarks, in order to support a more equitable, balanced, and inclusive representation of Indigenous histories, contributions in Hamilton, the history of colonialism and residential schools, and a spirit of reconciliation.”

Hamilton City Council is set to debate two different motions this week by Councillor Nrinder Nann related to allegedly racist landmarks. Nann wants both the Sir John A Macdonald statue in Gore Park to be removed and for the Ryerson Recreation Centre to be renamed.