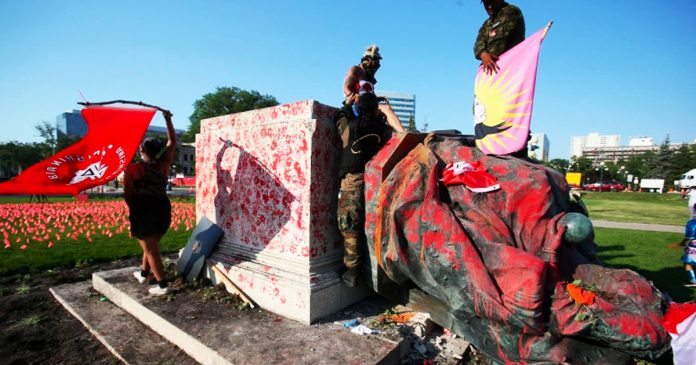 Watching video footage of angry radicals tearing down statues of both Queen Victoria, Canada’s founding monarch, and Queen Elizabeth II, our reigning monarch, outside the Manitoba Legislature is an overwhelming experience.

There are a few striking elements: the brazenness of the mob, destroying a piece of our shared history in broad daylight; the euphoria of the crowds cheering; and the complete absence of any authority or police to stop this madness.

Instead, police arrested a man who was reportedly trying to stop them and protect the public monument.

Not to fret, the CBC described the riot as “largely peaceful.” Much like how much of the media in the United States insisted that violent riots that destroyed inner cities across the country last summer were not violent.

“Fiery, but mostly peaceful protest,” read an infamous headline on CNN, where a reporter can be seen insisting the crowds were peaceful despite a large unconfined fire blazing behind him.

The reality is that riots are not protests, and property damage is not peaceful.

This Winnipeg mob, of course, doesn’t exist in a vacuum. Violent vigilante groups have been emboldened in recent weeks due to a misleading media narrative on residential schools.

For those who duck their heads and tune out much of the media narrative – and I salute you – here is just a rough overview of the attacks on core symbols of our country in the last few days:

Five Catholic churches on First Nations reserves in British Columbia were either burned down and vandalized.

Eleven more churches in Calgary were vandalized and dosed with red and orange paint in just a few hours on the eve of Canada Day.

A historic 114-year-old church was set ablaze and reduced to rubble in Morinville, Alberta. In response, the Mayor of Morinville announced that all Canada Day festivities were cancelled. Nothing says “violence doesn’t get you what you want” quite like caving to the vandals.

Dozens of cities and towns across Canada, likewise, gave in and cancelled their Canada Day festivities.

This campaign of violence and self-flagellation all centres upon Canada’s historical policy of residential schools, which existed in some form from 1834 up until 1970.

Three First Nations bands, so far, have come forth to say that they have located the graves of those who are believed to have perished while attending these schools. No doubt more bands will soon do the same. Canada’s history of residential schools deserves criticism and recompense. But details still matter.

Each band says that unmarked graves were discovered through “ground penetrating radar” and that these findings merely confirm what the community already knew. No band has yet released a full report.

A lot of media have nonetheless spun these revelations into evidence of genocide.

Many falsely reported the findings as “mass graves” (they were not, as one of the chiefs herself clarified). Many more exaggerated what ground penetrating radar can do (it doesn’t locate human remains, just grave shafts), and others jumped to enormous conclusions about the cause of death.

Alas, too many journalists in this country are now more interested in virtue-signalling and being on the woke side of history than to concern themselves with reporting the facts or finding the truth.

Regardless of the current moral panic being drummed up in the media, anger over a failed government policy commenced 150 years ago does not justify political violence and attacks on our national symbols. Canada deserves better.

TERRAZZANO: Is anyone in Ottawa going to do anything about inflation?

FUREY: The elites are laughing about inflation