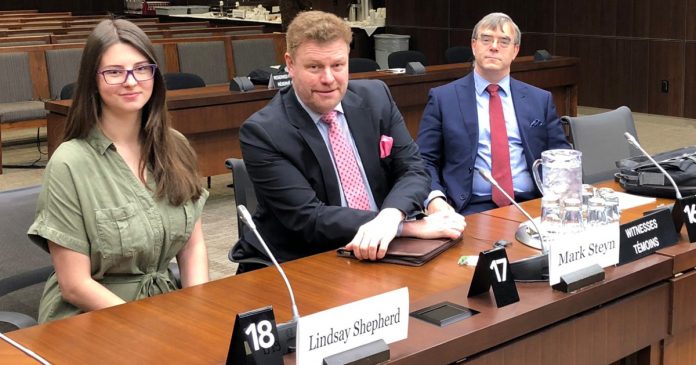 Two years ago, I received an invitation to testify in front of the House of Commons Standing Committee on Justice and Human Rights for their study on online hate. The committee was studying what remedies they could introduce to combat “hate speech” on the internet.

Many of the other witnesses were pressing the committee to reintroduce section 13 of the Canadian Human Rights Act, even though section 13 was a disaster that was repealed in 2014.

In a nutshell, a single individual – lawyer Richard Warman – was the primary complainant (and only successful complainant) under section 13, as he spent his time making fake profiles on Nazi websites, egging on the other users, and then filing complaints against them. Moreover, in 2006, the Edmonton Council of Muslim Communities filed a “discrimination” complaint with the Alberta Human Rights Commission against Rebel News founder (at the time, publisher of the Western Standard) Ezra Levant because he republished the Danish cartoons of Mohammed in his paper. $100,000 in legal fees and $500,000 taxpayer dollars later, the complaint was dismissed. Similarly, the Canadian Islamic Congress filed three complaints against writer Mark Steyn over his Maclean’s article “The Future Belongs to Islam,” but the complaints were thrice dismissed in 2008.

It became clear to Liberals and Conservatives alike that section 13 was giving human rights commissions too much power over the speech of Canadians, and it needed to be scrapped.

I am concerned about the potential return of legislation such as section 13 of the Canadian Human Rights Act, I told the justice committee in June 2019. What that legislation does is punish Canadians who, in exercising their right to peaceful, free expression, might offend a member of a protected, marginalized group.

If someone with a marginalized identity experiences commentary they find offensive, they can claim the offence is an attack on their identity rather than being legitimate expression. Human rights tribunals become the tools by which those who speak their mind peacefully and nonviolently, are silenced.

I argued that the government should absolutely not be regulating “hate speech” on the internet because they will define hate speech as anything they disapprove of, and it will cast too wide a net. Anyone who doesn’t parrot mainstream progressive ideology will inevitably get caught up in this hate speech law.

Yet here we are, two years later, with the Liberal government introducing Bill C-36. Bill C-36 will amend the Criminal Code so that if someone believes another person might possibly spread hate propaganda, that person can be hauled in front of a provincial court. If passed, the bill will also revive, with updated language, section 13 of the Human Rights Act.

The new proposed section 13 reads, “It is a discriminatory practice to communicate or cause to be communicated hate speech by the means of the Internet or other means of telecommunication in a context in which the hate speech is likely to foment detestation or vilification of an individual or group of individuals on the basis of a prohibited ground of discrimination.”

A fun fact from my testimony in 2019: in the justice committee’s final report, the NDP passive-aggressively noted in their contribution that “it was unfortunate that other parties [read: Conservatives] used this study as a venue to provide those who spread harmful messages a platform to further their insidious ideas.”

Promoting free expression is an “insidious” idea? They really have lost the plot.

A decade ago, there was outcry across the political spectrum to abolish section 13.

Let’s hope that this time around we will have that same multi-partisan opposition.