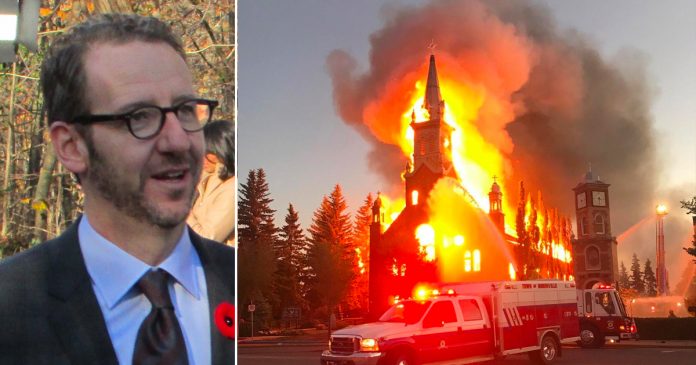 Canada’s former ambassador to China David Mulroney tweeted on Tuesday that Canadian elites were now “comfortable” with political violence that advances their own goals.

Mulroney made the statement in response to a tweet by former Liberal strategist Gerald Butts who said that the ongoing church burnings “may be understandable.”

Butts resigned from his post as Principal Secretary to Prime Minister Justin Trudeau in 2019 after being implicated in the SNC-Lavalin scandal.

“We’ve crossed a threshold. Elites are now comfortable with violent, anti-social acts that align with their own politics. The law and its protections are conditional. This never ends well,” tweeted Mulroney.

Mulroney is currently a Distinguished Fellow with the Munk School of Global Affairs and had served as Ambassador of Canada to the People’s Republic of China from 2009 to 2012. Mulroney also played a key role as a Deputy Minister in charge of the Afghanistan Task Force, among other political appointments.

Other prominent individuals have come under fire for seemingly condoning and egging on arsonists targeting Christian churches.

On June 30, lawyer and executive director of the BC Civil Liberties Association Harsha Walia tweeted “burn it all down” in response to a news article about two Catholic churches being engulfed in flames after they were targeted by arsonists.

To date at least 12 churches have been lit on fire and dozens more have seen incidents of vandalism and graffiti.

In his own statements addressing the church fires, Trudeau claimed that the incidents were “fully understandable.”

“It is unacceptable and wrong that acts of vandalism and arson are being seen across the country, including against Catholic churches,” said Trudeau.

“I understand the anger that’s out there against the federal government, against institutions like the Catholic Church. It is real and it’s fully understandable, given the shameful history that we are all becoming more and more aware of and engaging ourselves to do better as Canadians.”