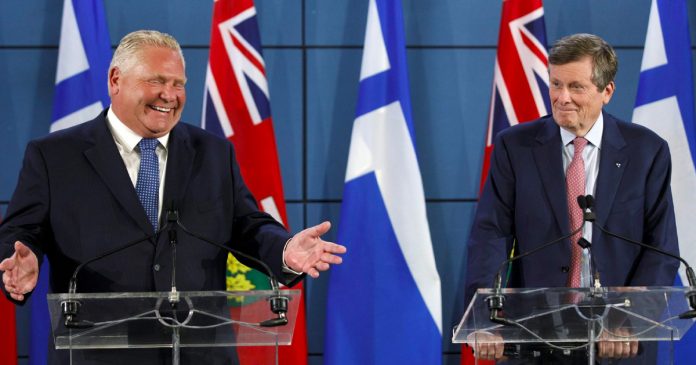 Politicians are well-known for speaking out of both sides of their mouths.

At no time did we see more of that behaviour than during the past 16 months of the COVID-19 pandemic when we expected our politicians to show some modicum of leadership.

Sadly, for the most part, that leadership has been lacking in so many areas.

Take the excruciatingly long lockdown in Ontario by a Premier who has spent far too much time listening to pollsters and public health officials (who want a COVID zero outcome) instead of actually sticking to the goalposts he himself set for reopening the economy.

Even though Ontario residents have far surpassed the vaccination goals set to move to Stage 3 of the reopening – with 78% with one dose and 46% fully vaccinated as of this past week – restaurants are being forced to wait one more week to permit indoor dining and retail to allow more shoppers in the door without the persistent line-ups outside.

In Toronto, Mayor John Tory crowed this past week that 50% of Torontonians are fully vaccinated.

This was shortly after he tweeted this seemingly tone-deaf message:

It’s tone-deaf because Toronto’s small businesses – forced by fearful politicians to lock down completely since last November — are barely hanging on by their fingernails, if at all. Ontario’s hair and nail salons finally re-opened to limited capacity on June 30 but Main St. retail is struggling to get up and running due to the 25% capacity restrictions.

The doors to gyms, spa services and indoor dining are still locked tight and heaven knows how indoor entertainment venues will manage to survive.

While Premier Doug Ford set the parameters and promptly ignored them, not a word of concern was ever uttered by Tory or other GTA municipal leaders that keeping us in the strictest lockdown in North America might not allow local businesses to “prosper and grow.”

Since we were not permitted to “shop locally” for so many months, we turned to online retailers and to stores south of the border as I did while in Florida – which were open for business throughout with the proper safety precautions (masking, hand sanitizing and physical distancing.)

We were dining indoors in Florida in April and visited both hair and nail salons more than once.

The world did not come to an end and the economy continued to operate on as many cylinders as it could. At least people still had jobs and there was an effort to keep things surviving, if not prospering.

Contrast that to Toronto, a city is hardly “sustainable” at this point. Take a stroll down any major street where shops and restaurants predominate and the For Lease signs stick out like a sore thumb in every third or fourth store window.

The business of the city’s downtown has been replaced in some areas by the drug-addicted and beggars, who have made their homes in Tent Cities in nearby parks.

He says, however, that independent retailers in Toronto really needed Tory’s help during the 224 days they were locked down since COVID began.

“Despite a lack of any evidence that small retailers were a source of COVID spread, the City of Toronto did nothing but support the province’s lockdown measures,” he said.

Midweek, when Toronto’s medical officer of health Eileen DeVilla pronounced that we’d be wearing masks in Toronto until at least Oct. 1 – long after most states south of the border and Canadian provinces have dropped their mask mandates – Tory insisted that he wants to see as “many things open as soon as possible, but safely done.”

That’s akin to being a little bit pregnant.

Besides, it’s rather disingenuous, considering Tory has spent much of his efforts in recent months cheerleading about the need for vaccines amid promises that if everyone gets vaccinated, things can open up as soon as possible.

But when people get vaccinated, they find things are not opening up — that politicians are really using the carrot and stick approach to keep us compliant.

The idea that the city of Toronto cares in the slightest about small business was quickly dashed this week when the mayor’s executive committee voted to listen to the vocal minority and change the name of Dundas St. – a move that will cost upwards of $7-million, if not far more.

Let’s first talk about the sheer gall of city councillors approving this foolish, costly, unnecessary exercise as businesses struggle to come out of a pandemic if they’ve managed to survive at all.

But don’t forget the move will impact 4,500 businesses, who might if they’re lucky “could be eligible” for support for half the cost of changing their signage under the city’s Commercial Façade Improvement program.

As for recovery post-COVID, the city’s economic development department has a plan, according to city officials, to help get small businesses and the cultural sector back up and running — one that hands a mere $5-million to business improvement areas to help.

Frankly, the plan should be simply to let them open their doors. After 16 long months, they know how to take precautions without our government overseers giving them advice.

Kelly says that for every hour and every day we are in lockdown, more and more businesses are making the decision to pack it in.

“They don’t have the staying power,” Kelly said. “They’ve already been holding things together with tape and glue.”

The CFIB predicts 75,000 or 1 in 5 small businesses will be forced to shut down in Ontario before this is all over.

Just take a walk down any Main Street in downtown Toronto and it will quickly become evident it is already over for far too many small shops.