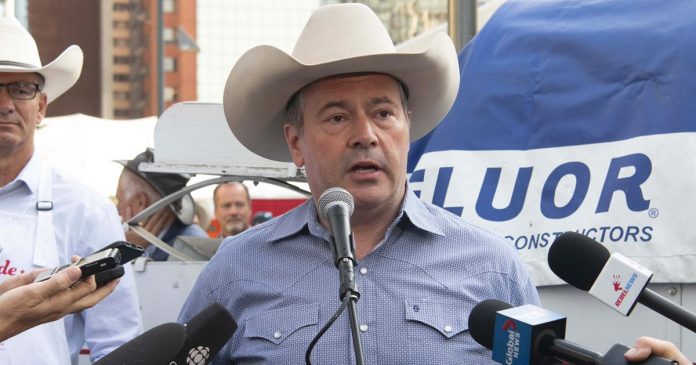 Alberta Premier Jason Kenney is ruling out introducing COVID-19 vaccine passports and vowing to fight Ottawa if it pursues them.

“We’ve been very clear from the beginning that we will not facilitate or accept vaccine passports,” Kenney told reporters at a Calgary Stampede breakfast Monday.

Vaccine passports are official documents that confirm a person’s immunization status. The certification could be used by governments or private businesses to restrict the activities of unvaccinated individuals.

Kenney said he believes vaccine passports could contravene Alberta’s Health Information Act and the province’s Freedom of Information and Protection of Privacy Act.

Civil liberties experts have tended to agree with this assessment, noting the discriminatory nature of vaccine passports, and their effect of forcing the disclosure of private medical information.

Kenney went beyond simply refusing to adopt vaccine passports at the provincial level. He also vowed to resist any attempts by the federal government to mandate them.

Quebec is developing a COVID-19 vaccine passport system that may be used in non-essential settings such as gyms, bars, restaurants, festivals and major sporting events. The province is expecting to have the program running in September.

Manitoba has begun issuing immunization cards to fully vaccinated individuals but says there are no plans to prevent unvaccinated people from accessing public services.

Ontario’s Seneca College announced Monday it would be requiring students returning to campus in the fall to be fully vaccinated against COVID-19, the first Canadian post-secondary institution to do so.

About 74% of Albertans 12 and older have received at least one dose of a COVID-19 vaccine, provincial tracking data shows. Approximately 55% are fully vaccinated with two shots.