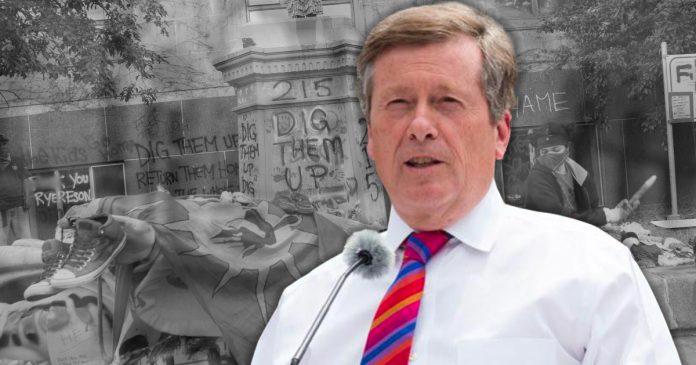 The statues of these famous historical figures were all defaced, beheaded, torn down and removed over the last few weeks, mostly by an angry mob of leftist activists.

The anti-colonial activists who swooped in and attacked in cities where the first three statues were once located – Winnipeg and Victoria – deemed it retribution for the treatment of Indigenous children at Canada’s residential schools.

In Charlottetown, council voted at the end of May to remove the statue of Canada’s first prime minister, Sir John A. Macdonald–defaced several times – until they decide what to do with it.

In Toronto, the monument to Ryerson–located on the grounds of the university by the same name– was covered in red paint, beheaded and dragged off its footings by shrieking protesters who seemed to be out for blood. They dumped the head in Lake Ontario.

The statue of McGill was quietly removed from its place on the downtown campus on July 9.

It would seem that statues – at least those that provide an enduring memory to those who helped build the British empire and establish the Canada we know today – are quickly and not so quietly becoming extinct.

Without a second thought, the “woke” activists have determined that anyone they’ve deemed a colonialist – in an era where colonialism created our country – must be cancelled.

But at Toronto City Hall, the leftist councillors who support the activists and their peculiar brand of retribution have decided that an icon to one of their own is perfectly acceptable.

In true “progressive” style, it is not a cheap icon either.

A competition is on to create a $250,000 statue in honour of NDP councillor Pam McConnell who served in public office for 35 years.

The competition, which opened last week, invites artists of “diverse backgrounds” – in particular Indigenous, black and racialized artists – to apply before the Aug. 16 deadline.

The statue, according to the city notice, is to highlight the “outstanding contributions of the former political leader whose dedication to community and social justice facilitated solutions to many challenges facing lower-income communities.”

It is to be placed in the revitalized Regent Park, where McConnell lived after advocating for every step of the costly revitalization through council approvals.

A spanking new aquatic centre in the same development  – with three swimming pools – has already been named after her. Additionally, she has a scholarship in her name – The Pam McConnell Award for Young Women in Leadership – to honour her “tireless advocacy for women’s rights and social justice in the City of Toronto.”

The statue and the aquatic centre naming were first raised as a possibility in July of 2018 in a motion put forward by a fellow leftist councillor and seconded by Mayor John Tory.

The statue didn’t get any further attention until this past May when Kristyn Wong-Tam, another leftist who represents much of McConnell’s ward, moved that some of her Section 37 money be used to create the statue. That motion was seconded, again by the mayor.

Never mind that Toronto’s politicians are spending $250,000 in the midst of a pandemic, during which many Torontonians lost their shirts. But even worse, the statue is being paid for using Section 37 funds.

For those unfamiliar with Toronto city council jargon, Section 37 money is paid by developers in exchange for increased density (usually in a condo development). It is supposed to go towards projects that provide “community benefits” – things like streetscape improvements, community and daycare centres, transit improvements and park and playground upgrades.

In all the years I’ve written about Section 37 money, I don’t recall it ever being used to erect a statue to a councillor.

A $350,000 statue to former NDP leader Jack Layton at the Toronto Ferry Terminal was paid for through fundraising efforts by the Ontario Federation of Labour.

But let’s revisit the entire crazy notion for a moment.

Statues of colonialists who brought settlers to our country – flawed like most of us but a product of their times – have been torched, covered in paint, beheaded and tossed in the lake, or ocean.

But a former city councillor, also imperfect, will have a life-sized colossus built in her honour – just because she’s viewed by those who control the purse strings at Toronto City Hall as having been progressive.

It will be erected on the grounds of a development she pushed through council from start to finish and where she bought herself a prime 1,200-square-foot condo – with a full wrap-around southwest-facing balcony – for a hugely discounted $418,464, without a second thought about the optics of a potential conflict.

The former deputy mayor was seen by the left-wing media as a champion of the poor even though she was always a top spender vis-a-vis her council expense account.

She routinely racked up huge bills on taxis even though she had a free Metropass and, for years, she travelled from one part of Canada to the other for a federal municipal organization – spending up to $15,000 in tax money per year to do so.

As head of council’s poverty reduction strategy before her death at 71, McConnell presided over 17 recommendations – including one to make the TTC free for children 12 years and under.

As I first reported in 2019, over the four years she led that initiative, $181-million was spent on the plan – without any clue from the city’s bureaucrats monitoring the plan and whether it was money well-spent.

Now this isn’t to savage the 35-year politician.

It is merely to provide yet more evidence of the tremendous and frankly destructive double standard in the current Canadian political climate.

Not only are icons of leaders from 300 years ago being taken down. But in October of 2017, the same Toronto councillors cruelly turned down a simple naming of an Etobicoke football stadium after former mayor Rob Ford.

The decision to spend $250,000 on a statue to McConnell – perhaps seven times the cost in the real world – is yet more evidence of our upside-down topsy turvy political climate in Canada.

It is a climate that lionizes someone who is seen to possess the right political pedigree, and it demonizes those determined by current society to be privileged – no matter the flaws of both.

It’s a world that sees winners and losers in black and white.