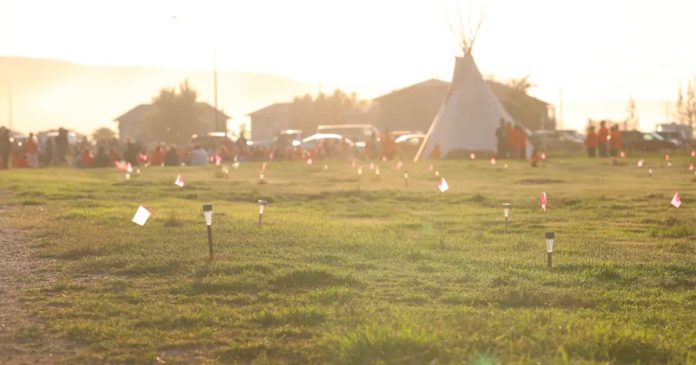 Can we discuss those unmarked graves?

Because the journalist and activist class is pushing a narrative about “mass graves” and leading the public to believe that Aboriginal children were the victims of genocide at residential schools between 1883 and 1996, anyone who questions this narrative is labelled a “genocide apologist” and compared to a Holocaust denier.

This makes it more difficult to have an open, critical discussion about residential schools – but the panel event hosted by the Society for Academic Freedom and Scholarship and the Frontier Centre for Public Policy allowed that dissenting conversation to go forward.

In the early years of the residential school system – around the 1890s – approximately one-third of children died before their fifth birthday, retired Manitoba provincial court judge Brian Giesbrecht pointed out.

“Death in that time – the death of a child – was not an unusual thing,” he noted.

Child mortality at residential schools was not due to mass murder and genocidal intent, he contends, but rather the sad reality that children were susceptible to infectious diseases that were rampant across society during this time.

Tuberculosis was named as the cause of death in 48.7% of reported residential school fatalities, with influenza, pneumonia, and other diseases also present in the schools.

Rates of disease were also higher among indigenous populations: residential schools were introduced in the first 50 years of Confederation, a time when indigenous people were increasingly coming into contact with newly arrived immigrants. Alas, they were exposed to illnesses from which they did not yet have resistance to.

University of Manitoba professor emeritus Rod Clifton pointed out that the journalists and academics acting shocked at the “discovery” of the unmarked graves must not be aware of – or may have conveniently forgotten – Volume 4 of the 2015 Truth and Reconciliation (TRC) report, which is an entire volume about unmarked graves at residential schools.

Indeed, a skim through this report contains passages such as an account of the 1918 influenza pandemic at the school in Fort St. James, BC, where all of the staff members and all but two of the students came down with the flu. In total, 78 people died from that outbreak.

The principal, Father Joseph Allard, wrote in his diary at the time: “… I could not go to the graveyard with all of them. In fact, several bodies were piled up in an empty cabin because there was no grave ready. A large common grave was dug for them.”

Clifton noted that “burying people in cemeteries with headstones is a very recent addition to the indigenous cultures of Canada.”

“If you go to the Anglican cemetery on the Siksika reserve… between 80 and 90% of the graves are unmarked.”

Giesbrecht spoke about how historically, it was the wealthier classes that were buried with headstones in graveyards. These markers were actively maintained by a company or community members. Poorer people did not have this – rather, they would be buried with a simple cross, and unless their burial site was maintained, it would deteriorate.

In addition, gravesites adjacent to residential schools likely included not only the bodies of students, but also teachers, members of the Catholic church, other local community members, and, in at least one case in Brandon, Manitoba, the bodies of nearby mental hospital patients.

“I won’t say that these graves have been ‘discovered…’ because most of them were not lost, and they were just forgotten, at best,” said Clifton. “Only with proper forensic analysis by well-qualified professionals will we get at the truth.”

“The sensational comments by journalists, academics and some indigenous people are not helping get to the truth.”

So why does the media and activist class keep pushing the “mass grave” narrative, even though chiefs from the Tk’emlups and Cowessess nations said themselves that the burial sites are not mass graves?

According to Widdowson, in order for a genocide to have happened, you need mass graves.

“That’s kind of the smoking gun for genocide,” explained Widdowson. “That’s why the ‘mass grave’ was being emphasized… there’s all this innuendo going on about that.”

Residential school attendees have legitimate grievances, and the government was far too stingy with the way it ran the schools, the panel agreed – but what is the motivation behind the charges of genocide?

“Genocide – charges of genocide – is the most significant crime that a state can perpetrate, and so it provides much more rationalization for dispersal of funds,” said Widdowson.

“If we were just to say, as it was the case, it was neglect… it’s not got the same kind of punch – leverage – that you have with ‘genocide.’”

“The more serious the accusations, the more emotional the tenor, the more easily you’re going to be able to get transfers being provided,” she contends.

The panel connected the hyperbolic media narrative to increasing calls for more compensation by what is often disparagingly referred to as “the Indian Lobby” – a group of activists, lawyers, academics and bureaucrats who benefit from more grievances and more financial demands for Canada’s First Nations.

“You have an elite that’s at the top… Residential schools – at least $100 million dollars went to lawyers. Huge amounts of money are going to lawyers,” Widdowson explained.

“There’s no end to the expenses,” Clifton said.

Upwards of $3.2 billion dollars has already been paid to residential school attendees.

Giesbrecht noted that it was a “fundamental error” to pay out nearly all people who attended a residential school without proving damages in court.

“What I find myself personally disturbed about is the slander – I think that’s the proper word – [of] nuns… ” said Giesbrecht. “In some cases, an order of nuns would dedicate their lives towards teaching these indigenous children… And now to be called these names and watch their churches burn…”

“It’s really something we as a nation should be ashamed of.”

Another point of discussion was the ground-penetrating radar that the Tk’emlups and Cowessess nations claimed located 215 and 751 corpses, respectively.

However, there are a number of legal and ethical issues with exhuming 3,200 graves. (3,200 is the number of residential school deaths identified by the TRC).

“I doubt that we’re going to see bodies dug up,” said Giesbrecht.

Without forensic analyses, the full truth about residential schools and unmarked graves may never be known.

Residential schools are being seen as the root of all evil, Giesbrecht said, even though they actually have very little to do with current issues facing Aboriginal people.

“This is really a terrible moment for the country,” he said.