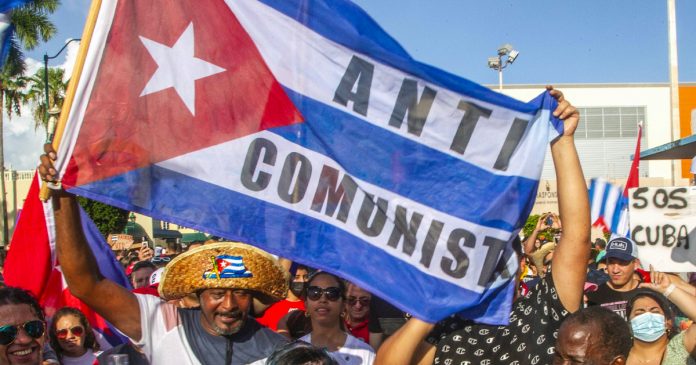 The article was republished by CTV News, Montreal Gazette and other legacy media outlets.

Since the anti-government protests in Cuba began – the largest since the communist regime took power in 1959 – the Cuban regime has consistently blamed the US embargos for its economic woes. However, the Cuban protesters are blaming the regime’s poor handling of the pandemic, the lack of basic goods and abuse of civil liberties on the island nation.

In the article, the Canadian Press highlights a small pro-communist demonstration outside the U.S. consulate in Montreal, but fails to acknowledge much larger pro-freedom protests taking place across Canada.

On Facebook, the event in question had only 30 people attending.

“Several people gathered Saturday afternoon in front of the U.S. consulate in Montreal to demand the lifting of the U.S. embargo against Cuba, where historic anti-government protests occurred last week,” stated the article.

The pro-communist protest was hosted by the Table de concertation de solidarité Québec-Cuba (TCSQ-C), a small organization that promotes solidarity with the Cuban communist regime.

The Canadian Press repeatedly asked the TCSQ-C for comment, but didn’t bother to fact check the TCSQ-C’s claims or request comment from pro-freedom voices.

“[TCSQ-C secretary Sean] O’Donoghue thinks the goal of the embargo, introduced in 1962, has always been to impoverish the country so ‘people become enraged and overthrow the government,’” the Montreal Gazette wrote.

“O’Donoghue hopes the Canadian government will maintain its relationship with the Caribbean country and it puts pressure on the U.S. to put an end to the sanctions.”

In Toronto, Ottawa, Montreal and other major cities in Canada, hundreds participated in protests in support of the anti-government Cuban protesters. A number of Canadians of Cuban descent have voiced their concerns about the ongoing human rights abuses in Cuba and the dangers of communism.

As the anti-government protests in Cuba continue, the Cuban regime has cracked down on hundreds of its citizens – many have been arrested, are reported missing and the internet has been shut down.