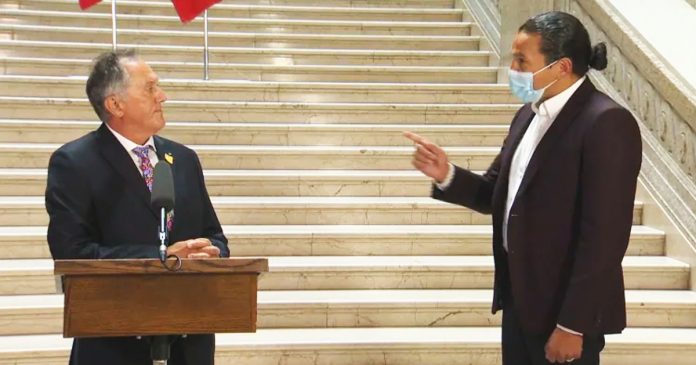 In British Columbia, the Tk’emplus Band presented its preliminary findings on the discovery of unmarked graves, and in Manitoba, the government introduced its new Minister of Indigenous Affairs.

This second event only matters because of the first.

In late May, the Tk’emlups band fired a shot heard around the world: it had used ground-penetrating radar to detect the remains of 215 children who were said to have died while attending the local residential school.

This set off a whirlwind of events: exaggerated headlines, erroneous claims of mass graves, accusations of genocide, international shame and contrition, more discoveries from other bands, genuine remorse and sadness from all Canadians and eager progressives competing over who could use the most hyperbolic anti-Canadian rhetoric.

This all culminated in the burning and desecration of more than 45 churches and the toppling of half a dozen statues.

Thursday’s media presentation didn’t deliver another jaw-dropping headline, but it did give us a better understanding of what was discovered.

A researcher from the Fraser Valley University near Vancouver walked us through her research and methods, explaining how she detected roughly 200 “subsurface anomalies” which remain “targets of interest.” The 215 figure, we were told, was given in error. And to be clear, no one yet knows if these 200 “anomalies” are graves. We do know with certainty that these were not mass graves.

Most journalists in attendance didn’t bat an eye at the change in the grave count. The facts don’t matter as much as a narrative — something that each of the three scientists who presented reiterated.

“A preliminary investigation such as this is not intended to provide exact numbers or final results,” said the Fraser Valley researcher, who concluded by saying her research was not necessary to confirm the Truth about residential schools and that the “Ceremonial Knowledge Keepers’ oral histories” are more important than her painstaking research.

This brings us to Manitoba. Last week, Premier Brian Pallister went against the grain by making a rather benign point that early Canadians had good intentions and tried to “build, not destroy.”

This was Very Bad, we were told by the progressive thought police in the CBC and elsewhere.

This “controversy” led to the resignation of Pallister’s Indigenous Affairs Minister and the announcement of a new minister for the post, Dr. Alan Lagimodiere.

Lagimodiere, who is Metis and grew up in Northern Manitoba, was asked about Residential Schools. He condemned them, citing a medical report at the time describing the harsh conditions that allowed diseases like Tuberculosis to fester and kill.

He also noted, rather unfortunately given the current climate, that the people who presided over the schools believed they were “doing the right thing at the time.”

This is an interesting area of discussion, and one that is glossed over in this cultural moment of over-the-top self-loathing as a nation.

Universal education is generally celebrated and often cited as a pathway out of poverty for marginalized and excluded people. In the Victorian Era context, that meant boarding schools with strict rules, harsh conditions and corporal punishment. It’s these methods that we condemn today.

But this sort of nuanced discussion has no place in today’s society, and NDP Leader Wab Kinew, who is also Indigenous, showed up to remind us of this sad reality.

“You have to change that thinking,” Kinew told Lagimodiere, confronting him at the podium. “You can’t be out here defending Residential Schools if you want to work with Indigenous communities.”

A visibly uncomfortable Lagimodiere grimaces and nods along, looking a bit like a deer in the headlights.

“‘Killing the Indian in the child’ was wrong, that’s what they talked about at the time,” said a confident Kinew.

The above quote was not used in the Canadian context. It’s an American quote that is often misattributed to Duncan Campbell Scott, a celebrated poet who wrote beautifully and empathetically about First Nations people but also oversaw the residential school program from within the federal bureaucracy.

Sir John A Macdonald said the goal of the schools was to “take the Indian out of the child,” which, while equally bad, points to the idea of assimilation not genocide.

Regardless, Kinew seems to have won the day — at least in the eyes of the media and his cheerleaders celebrating online. But outside the social media bubble, Kinew may not have played so well.

This stunt boiled down to a demand that everyone use his exact wording or else they cannot be in government. He takes cancel culture to the extreme, personifying the woke mob and demanding intellectual conformity. Minister Lagimodiere can only stand there and say nothing because anything he says is wrong and will be used against him.

This whole ordeal is a metaphor for how so many Canadians feel.

When the mob confronts you, keep your mouth shut, brace for impact and pray for minimal damage.