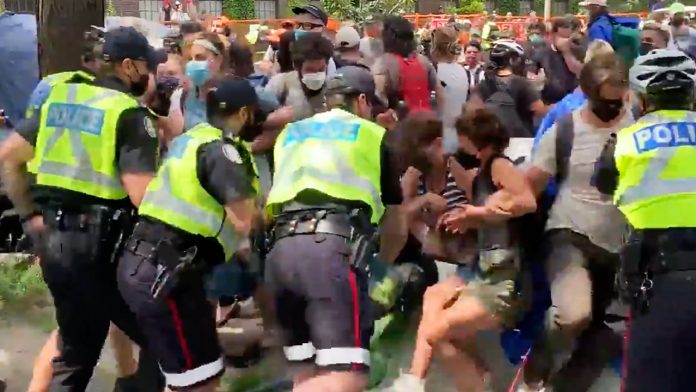 More than 20 protesters were arrested by Toronto Police on Wednesday after trying to block city employees and Toronto Police from clearing the illegal homeless encampment at Lamport Park.

The protesters – most of whom are not homeless and do not live in the encampment – showed up in hundreds to protect an illegal homeless encampment from being cleared.

Many of the activists blocking the police belonged to the Encampment Support Network, a volunteer network that supports residents of the illegal encampments.

Toronto Police arrived at the scene in the morning to notify those living in the encampment that they were trespassing and that they must leave. The police put up fencing to block out protesters and clear the way for city officials to dismantle the encampment.

As protesters refused to listen to police orders, they were met with force by law enforcement.

Footage from the scenes at Lamport show the protesters actively blocking police from clearing the tents and refusing to obey commands.

When the police arrived, they fenced off the homeless encampment to keep protesters and activists out and allow for the city to do its job. As the crowd of protesters grew, they eventually broke through the fencing.

These clearings began after people living in four different homeless encampments received trespassing notices from the city. Residents of these encampments that refuse to leave also face a fine of up to $10,000.

The City of Toronto has provided hotels and other forms of shelter to the residents of the illegal encampments however many of them prefer to live in the encampments instead citing the fear from random check-ins.

Speaking after clashing with protesters, Toronto Police Staff Supt. Randy Carter said that the police were there to support city workers and make sure that the public was safe.

“We do our best to get to a place where nobody gets hurt and where we don’t have to be physically fighting with people but you were all witness to how we had to get to that place today,” Carter said.

Speaking to the Toronto Sun after having to leave his encampment, Joey Mauger said, “We like it here, we don’t want to go and we don’t know where we’re going to go.”

He added that he had been living there for six months.