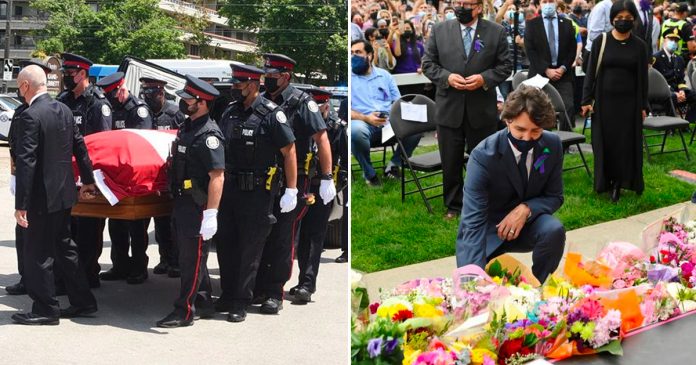 Immediately after the tragic death of Const. Jeffrey Northrup on July 2, the Toronto police issued a statement indicating a man had been charged with first-degree murder.

We heard that Northrup had been “deliberately” struck in the parking garage of Old City Hall in downtown Toronto. We were also told Northrup’s partner was treated and released from hospital in relation to the incident.

We were informed that the person charged in connection with the death was 31-year-old Umar Zameer and that he appeared in court that same day. No pictures of the suspect were released, by police or media.

Unlike other police press releases, there wasn’t even an indication of where Zameer called home. We don’t know if he was also charged in connection with Northrup’s partner.

A publication ban was quickly slapped on any further details of the alleged killing, and to this day there has been radio silence.

No journalist in Canada, from the best I can tell, has bothered to question who this man is, his background or where he came from.

A week has gone by since Northrup’s funeral, and crickets from the media.

A Toronto police spokesman informed me Tuesday that there is “no further information” to be provided due to the publication ban.

It’s as if protecting Zameer’s rights is more important than the officer he allegedly killed.

But we only have to look to another sad incident that occurred the month before in London, Ontario to find proof of the shameful double standard perpetrated by the police, our politicians and the media who go along with this selective narrative.

While Prime Minister Justin Trudeau took two long days to weigh in about Northrup’s tragic death, in the London case, he and everyone else couldn’t wait to call it a “hate crime” and to label the alleged perpetrator as a “terrorist” and the incident a “terrorist attack.”

On the evening of June 6, a Muslim family of five was mowed down by the driver of a black pickup truck as they were out for a walk. Four succumbed to the injuries while a nine-year-old boy survived.

Nathaniel Veltman, 20, was charged with four counts of first-degree murder and one of attempted murder in connection with the attack.

Within hours, his photos were circulating on social media as members of the legacy media were quick to post photos found of the alleged perpetrator as a teenager. It didn’t even take London police 24 hours to call it a “planned premeditated act motivated by hate.”

One week later they laid terrorism charges against him after working with federal crown prosecutors on the case.

This is despite the fact that police admitted they had not established a connection between Veltman and known hate groups. Police have never said what evidence led them to surmise he engaged in an alleged terrorist act.

Veltman was tried and convicted in the media and questions of his mental state were conveniently ignored, according to one source. A court document from his parents’ divorce several years ago revealed that he suffered from mental illness and was medicated.

But mental illness didn’t fit with this narrative, it seems.

Still, the die was cast from the get-go after Trudeau wasted no time calling it a clear terrorist attack, as did his second in command, Chrystia Freeland. She called it an “act of terror.”

Premier Doug Ford and even Mayor John Tory engaged in the de rigueur acts of virtue signalling following the tragedy.

The story was covered by CNN, the BBC and the New York Times – all eager, of course, to call out acts of alleged terrorism.

Vigils were held across Canada in a tremendous outpouring of compassion we have not seen with Northrup, a father of three whose life was cut short too after 31 devoted years on the Toronto police force.

This is not at all to say that either act of violence is acceptable. They are both heinous.

But what the handling of the two tragedies shows is a dangerous precedent by the institutions we are supposed to trust of selectively deciding what narrative the public should hear.

In one case, everyone jumped on the bandwagon of alleged hate and terrorism – whether true or not – dispensing information that likely prejudices the perpetrator’s right to a fair trial.

On the other, our politicians, the police and the media are content to jump over backwards and circle the wagons to keep us in the dark about an alleged perpetrator who has also been deemed by police to have committed a “deliberate act.”

One is a terrorist. The other, who knows?

If the police brass and politicians have their way, we’ll never find out.