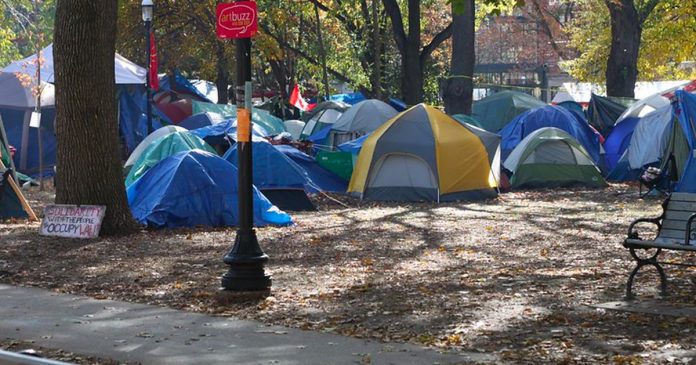 If nothing else, the activists who’ve enabled the homeless to languish in squalor in Toronto’s downtown parks for more than a year are predictable.

As has occurred with every long overdue eviction of the Tent Cities, the activists – largely a group of artists, academics, harm reduction workers and other radicals associated with the Encampment Support Network (ESN) –issued a call to arms early Wednesday morning on social media to come down to Lamport Stadium.

This was the third encampment to be cleaned out in a matter of weeks and the activists intended to do everything they could to stop the eviction–or at least to put on a good show.

People were instructed to be at the encampment as early as 5 a.m. and look for “greeters” with “yellow armbands” to get their marching orders.

The ESN activists issued a shout-out to supporters to help the homeless “stand their ground” – claiming that this is what the homeless located at Lamport Stadium and Moss Park want.

“The clearing took place without proper consultation or due respect for the human right to shelter,” the ESN activists wrote on their social media pages.

As the day progressed, the ESN repeatedly tweeted pictures showing the number of cops and mounted units on scene and tales of people being “pepper-sprayed,” “violently beaten” and arrested.

Having watched this circus for more than a year and the tactics of the ESN activists I’m guessing those arrested were not the homeless.

I’m also presuming that these rabble-rousers – many of them “Defund the Police” types – were doing all of this for the cameras and the single-minded legacy media reporters, some of whom seem to think it’s fine for the homeless to squat illegally in sordid conditions in downtown parks contrary to city bylaws and public safety.

Make no mistake, despite the hyperbole of the activists, they were given ample warning that the parks would be cleared. Trespass notices were posted at Trinity Bellwoods and Alexandra Parks, Lamport Stadium and Moss Park on June 12.

This wasn’t the first attempted eviction of Lamport Stadium Park either. In mid-May when police tried to remove the tent dwellers there, they were also met with resistance from the ESN and other supporters.

But no matter, the activists have consistently used the homeless as their pawns in the 20 years I’ve followed this issue. It has forever caused me to wonder whether they really care about the homeless or about their own agenda – seemingly keeping drug addicts high through harm reduction methods and keeping the homeless out in the open to guilt politicians into throwing more money at the poverty industry.

For more than a year, the prevailing notion – from progressive politicians, activists and journalists – has been that the Tent City folk have far more rights than tax-paying families who just want to use their parks for picnics, to play with their kids or to walk their dogs.

The ESN has done everything they could to keep the homeless in the parks – despite the availability of fancy hotel rooms for them costing taxpayers $220 per night. They’ve delivered food, water, new tents and in the winter Durofoam pods and survival supplies.

This ideology turned Alexandra Park – located at the corner of Toronto’s Bathurst and Dundas Sts. – into a horrendous Shantytown.

When I visited there last month, the grass was up to my knees and there was debris and garbage everywhere around the 70-odd tents. The park was pretty much empty except for the tent dwellers.

A few days before the cleanout of Trinity Bellwoods Park, I biked down there to find a woman with a baby stroller concerned about manoeuvring along the path through the Tent City. One of the residents of the several dozen tents and wooden structures was busy occupying himself throwing things at passersby.

Despite plenty of evidence from such cities as Venice Beach, Seattle and Portland about what happens when activists are permitted to set the agenda with respect to Tent Cities, Mayor John Tory and his council let this drag on far too long.

After all, city officials conceded last October – in a submission to Ontario Superior Court – that there were frequent violent incidents, human trafficking, fires and “unsanitary conditions” in the encampments.

At one point Toronto fire officials reported that there was a 250% increase in encampment fires in a year and sources told me many times that drug dealing was rampant.

People living on the border of and across from the encampments repeatedly expressed concern with the noise, the fires, the fights and drug dealing which made it impossible for them to sleep or to enjoy a good quality of life.

But that’s the thing about the activists who prey on these vulnerable, often drug-addicted and in many cases mentally ill, Tent City folk.

Never mind the tax-paying neighbours trying to live beside the encampments.

The activists don’t seem to really care about the homeless living in these squalid conditions either.

They just want to make a point – namely, to defund the police – and as loudly as possible. Sadly, many media lap it all up.