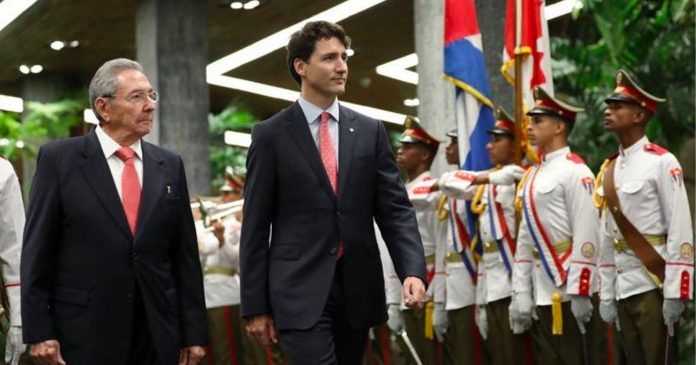 The Trudeau government appears unwilling to target Cuba’s oppressive communist regime with targeted sanctions against those responsible for cracking down on anti-communist protesters.

According to Bloomberg, Foreign Minister Marc Garneau declined to comment on whether Canada would be pursuing sanctions. Instead, a spokesperson for Garneau’s office said that adding sanctions is one potential tool available in defending human rights.

On Thursday, the US Treasury Department issued sanctions on multiple Cuban officials. President Joe Biden said this was “just the beginning” of the US response to the Cuban regime’s repression of the recent wave of protesters on the island nation.

“I unequivocally condemn the mass detentions and sham trials that are unjustly sentencing to prison those who dared to speak out in an effort to intimidate and threaten the Cuban people into silence,” Biden said in a statement.

When Trudeau was first asked if he would condemn the communist regime’s horrendous human rights abuses, the prime minister did not have an unkind word to say about the Cuban regime.

“Canada has always stood in friendship with the Cuban people. We have always called for greater freedoms and more defence of human rights in Cuba,” Trudeau said, stopping short of condemning the Cuban government outright.

“We will continue to be there to support Cubans in their desire for greater peace, greater stability and greater voice for how things are going.”

The opposition Conservatives are calling on the Trudeau government to fast-track applications by Cuban-Canadians to sponsor relatives seeking to leave Cuba. While the government did not directly address the Cuba proposal, Immigration Minister Marco Mendicino’s office says Canada would continue to prioritize family reunification in welcoming newcomers.

Human rights groups believe hundreds of anti-communist protesters have been jailed in Cuba in recent days. The Cuban regime has also cut out internet access in an effort to suppress the protests.