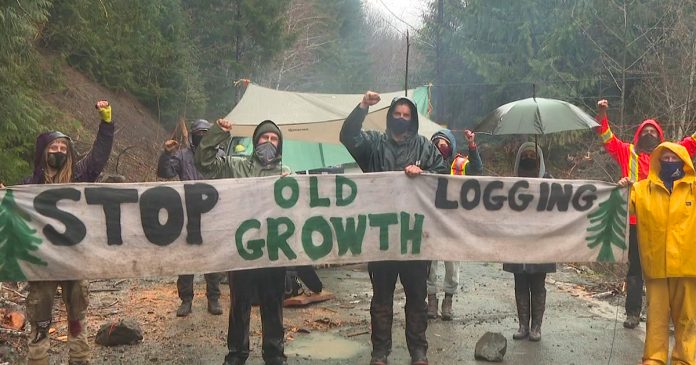 Eco-protesters on Vancouver Island are so determined to prevent old-growth logging of the Fairy Creek Watershed area that they’ve resorted to cutting down trees themselves to prevent it.

The RCMP in British Columbia says protesters cut down 18 trees to block vehicle access to the area, which was a breach of an injunction against the blockades that have been in place for months now.

The RCMP says they found trees had been cut with chainsaws and laid across a road to prevent vehicles from entering the area. The RCMP also says they observed one person smoking a cigarette surrounded by dry and tinder forest.

RCMP Chief Supt. John Brewer said in the statement that he is “gravely concerned” about the cutting down of trees and smoking in areas where wildfires could start. He says this type of behaviour is a danger to the safety of both officers and activists.

Since August 2020, protesters have been blockading logging roads near the Fairy Creek drainage on western Vancouver Island. Despite the BC government approving the request of a group of First Nations to defer old-growth logging of approximately 2,000 hectares for the next two years, the blockades continue.

According to the RCMP’s statement on Saturday, 16 people were arrested — including one individual who allegedly assaulted a police officer. 494 people have been arrested since the blockades began.

Teal Jones, the forestry company at the centre of the protests, holds licenses to allow it to log in the area. Teal-Jones signed agreements with the Pacheedaht First Nations, and the nation signed a revenue-sharing agreement with the province for all timber cut on its land.

In April, Pacheedaht Chief Jeff Jones and hereditary Chief Frank Queesto Jones indicated they were against the blockades.

The protesters are part of a group called the Rainforest Flying Squad.

On its website, the Rainforest Flying Squad says it is “a volunteer driven, grassroots, non-violent direct action movement” that is “committed to protecting the last stands of globally significant ancient temperate rainforest on Vancouver Island.”

The group claims that the old-growth logging of the Fairy Creek watershed area is “the ecological destruction of this land as colonial violence and a by-product of white supremacy and global capitalism.”

Victoria bans the construction of homes heated with natural gas