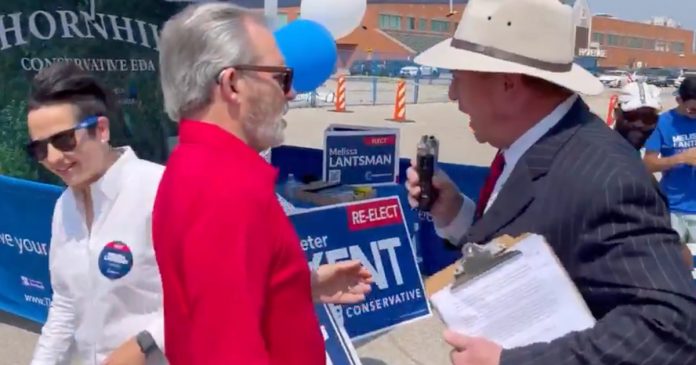 As a staunch small-c conservative, I’ve found myself let down one too many times by the party that claims to represent me – one that seems repeatedly hellbent on wrestling defeat from the jaws of victory.

An incident this past Sunday in Thornhill, a riding north of Toronto, made me wonder, yet again, if the party truly wants to oust Prime Minister Justin Trudeau, possibly the worst leader we’ve had in decades.

Conservative leader Erin O’Toole, desperate to show he embraces the big tent his predecessor apparently didn’t, thought he had the perfect candidate in Melissa Lantsman to replace the well-respected Peter Kent, a former journalist for Global News.

She isn’t the first lesbian to run for the Conservatives. I ran in St. Paul’s in 2009 for then-new Tory provincial leader, Tim Hudak.

But this time it’s different.

Back in 2009, while the media repeatedly wrote that it was a “coup” to get a gay woman to run, the focus was more on my feistiness as a journalist.

But while I wanted the focus of my campaign to be on my substance and not sexuality, Lantsman has embraced identity politics. This is partly because of O’Toole’s near-obsession with proving the Conservatives are not what the media portray and mostly because she, herself, has made her gayness a huge selling point.

Parachuted into Thornhill, she has promoted herself repeatedly as the gay candidate of record to change the face of the party. She also co-authored an op-ed in 2019 contending then-leader Andrew Scheer had to feel comfortable with LBGT issues if the party was ever to win.

Perhaps that has been to distract from her baggage–namely that after being a prominent member of Ontario Premier Doug Ford’s war room she promptly jumped back into lobbying.

During COVID she lobbied the province on behalf of Extendicare, even while seniors were suffering tremendously and dying in the hundreds in Extendicare-operated or owned homes.

She also represented Walmart to the Ford government – which decided to keep Walmart open during the lockdowns while small shops were ordered shut for more than 200 days.

Lantsman and her team had to know questions about her lobbying would come up during a campaign. Her activities were brought up several times by the Ontario NDP during COVID.

But when David Menzies of Rebel News arrived at Kent’s Summer BBQ Sunday and endeavoured to ask her about her lobbying efforts, she was ill-prepared – running away when he persisted.

It very quickly descended into a circus.

The tactics reminded me of those used by the progressives when they don’t like hard questions from a journalist.

Remember this is the very same party whose leader has consistently insisted he’s a free speech advocate and for the people, unlike our current PM.

When Menzies endeavoured to ask Lantsman whether she’d won the nomination based on merit or because of her sexuality, things went off the rails.

He was shoved, water thrown on him and aggressively blocked from getting any further answers.

It was a fair question given that there remains a cloud over a nomination race which long-time MPP Gila Martow was pegged to win, not to mention because of Lantsman’s own focus on her sexual identity.

He may be a pesky reporter who far too often makes the story about him when it shouldn’t be.

But he’s fair, tenacious and certainly not homophobic.

However, what this party that supposedly embraces free speech did next should leave all of us concerned.

The Lantsman team called the cops, not just one but several, had Menzies arrested, took his private notes and were caught photographing them.

I saw all of it on the video footage provided to me.

A few hours later, instead of apologizing for overreacting, Lantsman herself issued a press release accusing Menzies of “homophobic behaviour” and alleging she felt personally in danger.

To repeat, these are not tactics Conservatives should embrace. This is the stock and trade of the very progressives our party is seeking to replace.

So it’s now off-limits to ask an openly gay candidate – who has repeatedly promoted her gayness – a question about her sexuality? After all, she’s the one who made it a campaign issue.

Besides, what will happen when the progressive media start asking her tough questions about her lobbying efforts? Will her team call the cops on them too? Accuse them of being homophobic?

What will happen if O’Toole wins and Lantsman becomes one of his MPs?

Will she also turn her back on constituents who criticize her? Will one of her minions throw water on them?

In other words, is this a portent of things to come?

This incident should cause all of us to question whether the O’Toole team only pays lip service to free speech – and when push comes to shove, there’s not much difference between the Conservatives and the other two parties.

Or maybe they just aren’t ready for Prime Time.

The party should be very embarrassed about what happened in Thornhill on Sunday.

Whether they’ll realize it doesn’t make them look good is another story.