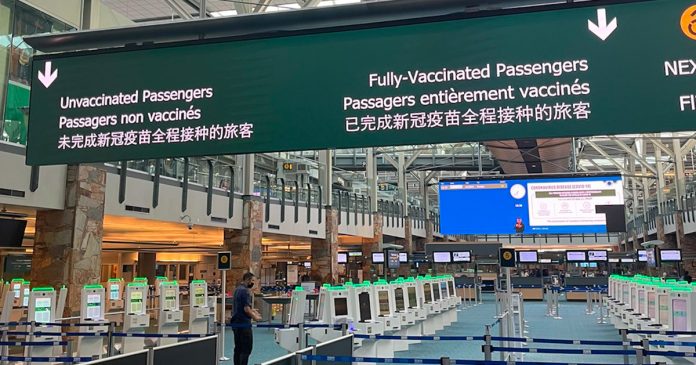 After three weeks of being in effect, the vaccinated and unvaccinated lines will be merged.

While the airport originally claimed that the separate lines would speed up the entry process for travellers, the airport now believes the lines “didn’t meet what we were hoping for.”

“There were a lot more vaccinated passengers coming into Canada than we had originally anticipated,” airport spokesperson Robyn McVicker told NEWS1130.

“Because of that, and because we did receive lots of feedback from our passengers, we talked to Transport Canada, we talked to CBSA and the Public Health Authority of Canada and the other airports, and we are changing the approach that we are using. Where now everybody will come through in the same way.”

McVicker says the airport didn’t anticipate such a large number of travellers to be fully vaccinated.

“We thought maybe like 15% of people coming in would be vaccinated. What we’re finding is actually sometimes it’s up to 80% on some flights … which meant that we actually needed the … whole customs hall in order to effectively process people,” McVicker said.

“Toronto Pearson, in collaboration with the government and other partners, has determined that separation of vaccinated and partially/non vaccinated travellers in customs lines results in minimal operational efficiencies,” a statement from the airport read.

“As such, the practice will be ceased as of July 26, 2021, with entry requirements based on vaccination status being enforced once a passenger reaches CSBA.”