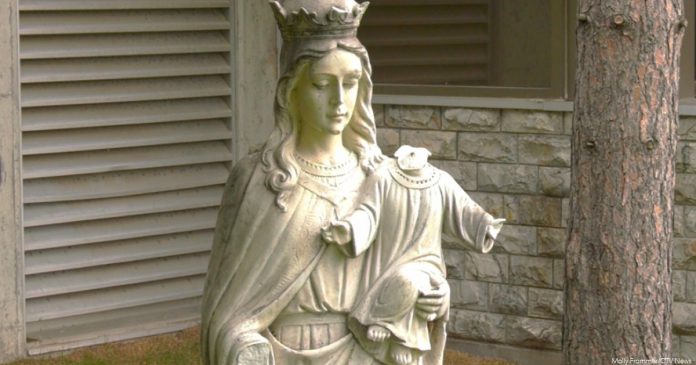 Vandals targeted a statue of the Virgin Mary and baby Jesus located at the Sainte-Anne-Des-Pins Catholic Church in Sudbury, Ont.

The statue of Jesus was beheaded.

Sainte-Anne-Des-Pins Catholic Church is the 56th church in Canada that has been vandalized, burned down or desecrated since the announcement of the apparent discovery of graves found near a residential school in Kamloops, BC.

Despite calls for calm by Indigenous leaders, Christian communities continue to be targeted by radical arsonists and vandals.

This isn’t the first time the Sudbury church has been targeted by vandals.

“The statue itself seems to be an article they focus on,” said Michel Chretien, with Sainte-Anne-Des-Pins. Earlier this year, the statue of Jesus was beheaded and had its arms broken off.

The church says there have been other property damaged over the past few years.

“We’ve had wires for the internet, wires for the air conditioning cut — even a few weeks back we had a small tree cut on the grounds,” Chretien said.

While the church has installed surveillance cameras, vandals continue to target the church.

“We do pick up 10 to 30 needles a day, especially in the mornings. At the moment, we are studying the possibility of putting a fence around the church grounds. It should be done within the next (year) or so,” Chretien told CTV News.

Sudbury Police say they have increased their presence in the Sudbury downtown area.

“This is a 52% increase in comparison to last year,” said spokesperson for the Greater Sudbury Police Service Kaitlyn Dunn.

“During COVID-19, we have seen a lot of our vulnerable population displaced in the downtown core and with this reduction in foot traffic as well as vehicle traffic, we have seen an increase in the visibility of crime. So, break and enters, mischiefs, and property thefts.”