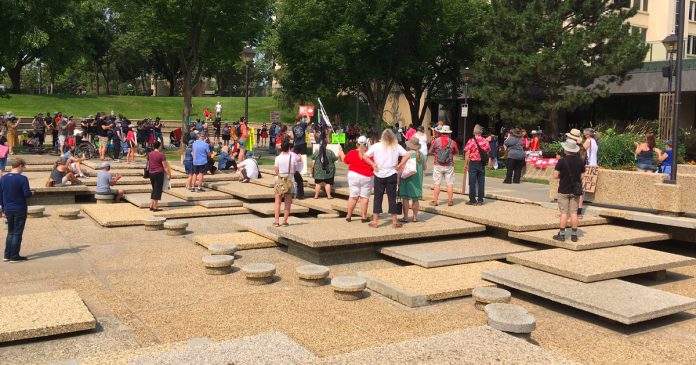 A small group of Albertans want more government in their life and are demanding the Kenney government enforce stricter COVID-19 protocols.

A handful of individuals who were masked and socially distanced outside participated in protests at McDougall Centre in Calgary and the Alberta legislature in Edmonton on Friday and Saturday. The protesters were upset with the Alberta government’s decision to loosen public health measures.

Earlier this week, citing high vaccination rates, the government announced that they would be dropping a number of public health measures, including contact tracers, mandatory isolation and the province-wide mask mandate.

The pro-lockdown protests were organized by Dr. Joe Vipond and Albert Nobbs.

Vipond is an outspoken critic of the Kenney government and has been in favour of lockdowns since the start of the pandemic. Nobbs is one of the founders of the Alberta Activist Collective – an advocacy group determined to defeat the United Conservative Party in the next election.

“Everything that I hear now coming out of [Chief Medical Officer of Health of Alberta Dr. Deena] Hinshaw’s mouth is gaslighting and outright lies. How can I trust my government?” said Vipond at the protest.

“We want resignations from Dr. Hinshaw, Premier Kenney, Minister Shandro and we want to negotiate a return to sane public health policy.”

He went on to add that Dr. Hinshaw has lost the “moral authority to be our public health leader.”

The protests were also attended by labour union groups, teachers union members and New Democrat MLAs, who all seized on the opportunity to criticize the Kenney government.

On Wednesday, Premier Kenney said that Albertans will need to learn to live with COVID-19 and accused the legacy media and activists of promoting fear.

“COVID continues to exist. As I’ve said before, the virus will continue to circulate. Numbers will go up and they’ll go down, but what matters most is that the widespread protective effect of vaccines is real,” Kenney said.

“We should stop listening to people who deny the powerful protective effect of vaccines.”

According to the latest government statistics, there are currently 1,655 active cases of COVID-19 in Alberta. Among eligible Albertans age 12 or older, 75.8% have now received a single dose of a COVID-19 vaccine while 65%  have now had two doses.