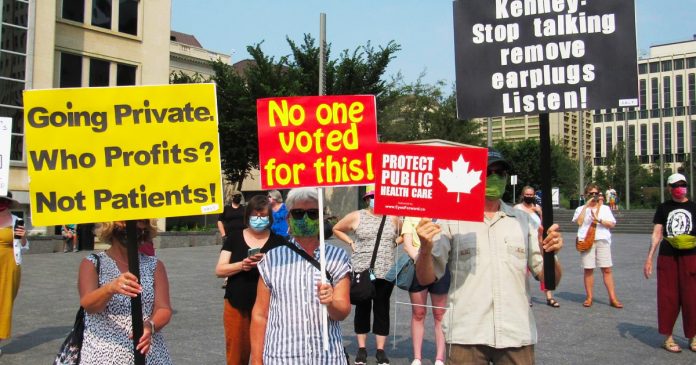 Canada finally has a province willing to stand against the madness of endless lockdowns, media fear-mongering, and irrational paranoia when it comes to COVID-19.

Alberta announced earlier this week that it is lifting many of its remaining COVID restrictions — including forced quarantine and mask mandates.

Alberta’s Chief Medical Officer Dr. Deena Hinshaw announced the province’s new approach to the virus earlier this week, noting that Alberta is dropping forced quarantine requirements for those who had close contact with a COVID patient, and later this summer will drop all quarantine mandates and many mask requirements.

In other words, they’ll be treating COVID much like any other airborne illness.

When you’re sick with the flu, you stay home – not because of some government edict but simply out of caution, respect for others and common sense. The government does not legally require quarantine for people with other illnesses, no matter how severe the symptoms are or how contagious it may be.

And while most Albertans let out a sigh of relief, these measures were quickly condemned and demonized by the usual suspects in the authoritarian left-wing lockdown crowd.

“Who does this to their own public?” read one CTV headline, in a story featuring an angry ER doctor (wearing scrubs in his own living room, for some reason) who apparently wants Canada to stay locked down forever.

While many journalists expressed anger at Alberta’s leadership for daring to open, some journalists directed that contempt at the people of Alberta.

“The first thing you need to know is that Alberta was initially largely settled by Americans, that they are god’s chosen people, and that it’s their hard work and ingenuity that put the oil in the ground, and it’s their hard work and ingenuity that pulls it out again,” said Dale Smith, an Ottawa-based freelance reporter who is a member of the Parliamentary Press Gallery.

“With this in mind, they are more concerned about individual “freedoms” than the collective good,” said Smith, who is originally from Calgary but apparently had so much disdain for his compatriots he left.

“It is inconceivable to me. It is the height of insanity,” added Calgary Mayor Naheed Nenshi of Dr. Hinshaw’s decision to no longer mandate quarantine.

It’s remarkable how quickly the tables have turned.

I’m old enough to remember three months ago when left-wing voices were hectoring the anti-lockdown crowd for daring to criticize the all-knowing public health officials. But now that public health officials are beginning to change their tune, the authoritarian lockdown crowd — including Nenshi and Smith — have given themselves permission to condemn these experts to their heart’s content.

It must be nice to believe you have the moral high ground no matter what side of the issue you take.

The global COVID pandemic and ensuing lockdowns gave these busybodies a taste of unlimited power and control, and they liked it a little bit too much to simply let it go.

Ironically, by demanding more restrictions — even for vaccinated Canadians — these left-wing doctors, journalists and politicians are undermining the case to get vaccinated.

The reality is that, according to data from the Public Health Agency of Canada, the COVID case mortality rate for patients with one dose is 0.0027% and 0.0018% for those who are double vaxxed. That’s about on par with the seasonal flu.

Compound the very low risk for the vaccinated with new information about the drastic impact of lockdowns on mental health and well-being and it makes Alberta’s new approach seem like a slam dunk.

A recent Statscan report showed that more than four times as many working-aged Canadians died from the lockdowns than from the virus.

Between January 2020 to April 2021, 5,535 Canadians under the age of 65 died because of “indirect consequences” due to the pandemic, while 1,380 Canadians in the same age group died from the virus during that same time period.

The lockdowns were deadlier than the virus for most Canadians. It’s time to stop listening to the left-wing lockdown authoritarians and start living our lives again.