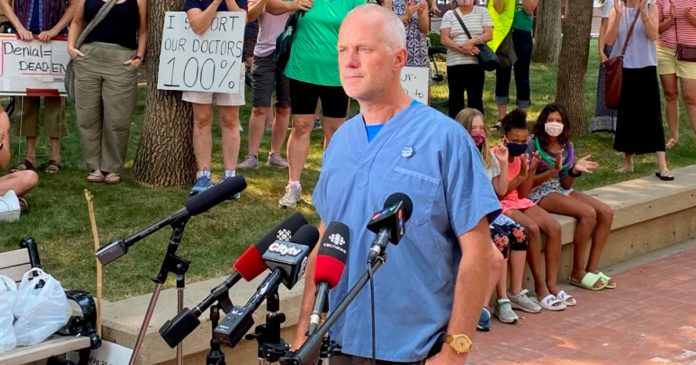 An outspoken Calgary doctor and frequent media go-to who has called on Albertans to topple the UCP government for lifting COVID-19 restrictions claims that he has no affiliation with the rival Alberta NDP despite donating nearly $20,000 to that party since 2014.

In a tweet, Dr. Joe Vipond urged Albertans to “take to the streets” to take down Premier Jason Kenney’s government in response to the province’s decision to lift mandatory COVID-19 quarantines and other public health restrictions. Vipond also called for a “general strike.”

A “general strike” is a mass mobilization of workers in a community. Such a display would involve most public sectors and could deprive Albertans of health, education, care for children and seniors, social supports, and other government programs, just as the province begins to recover from a devastating year of lockdowns.

“It’s quite evident now that public health is not actually putting in policies to protect the health of the public. I think this is a travesty, and I think she should resign,” said Vipond during a protest earlier this week.

Alberta elections finance data shows that a Joe and/or Joseph Vipond living in Calgary, Alberta has contributed $19,387.50 to the Alberta NDP in the last seven years.

When asked for comment, Vipond told True North that he had “no ties” to the NDP despite the tens of thousands in contributions.

“I have no ties with the NDP other than past donations. As a strong supporter of climate action, I felt it was my duty as citizen (sic) to support a party that acknowledges and acts on the climate crisis,” Vipond told True North.

Media outlets like CTV News, CBC and Global News have all quoted Vipond as a medical expert in response to the Alberta government’s changes without making any reference to his extensive political contributions to the NDP.

True North reached out to UCP Executive Director of Communications and Planning Brock Harrison for comment on Vipond’s political contributions.

“All Albertans are able to participate in the political process, and that includes donating to their party of choice. Nearly $20,000 in partisan political donations to the Alberta NDP speaks for itself. Readers can draw their own conclusions,” Harrison said in an emailed statement.

“Membership in a political party is not publicly disclosed, so we can’t speculate on whether an individual is an NDP member. Only the NDP would be able to confirm that.”

On Twitter, Vipond has vehemently denied any claims that he is an NDP activist or has ties to the party.

“Reference for me being a NDP activist doctor plz? Thanks for that. Otherwise this might be considered slander, if not true,” said Vipond in an Aug. 3 Twitter reply.

Reference for me being a NDP activist doctor plz? Thanks for that. Otherwise this might be considered slander, if not true.

“I am an independent practitioner with no ties to the NDP. If you have evidence to the contrary, feel free to produce it,” he also tweeted earlier that day.

I am an independent practitioner with no ties to the NDP. If you have evidence to the contrary, feel free to produce it.