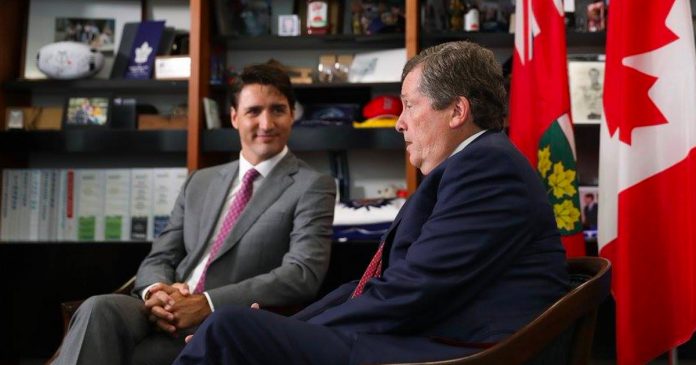 In the past six months, Prime Minister Justin Trudeau has handed over hundreds of millions of dollars in affordable housing money to Toronto with no checks and balances.

In reality, they will be mostly tiny modular housing units of 325-square-feet lumped together in a multi-residential building.

Simple math puts each “affordable home” at $433,376  just to construct, which does not include the dollars needed to provide supports such as harm reduction, mental health, wellness and employment counselling – facts not mentioned by federal minister Ahmed Hussein,  Toronto MP Adam Vaughan or Mayor John Tory at the two highly promoted announcements.

Government-subsidized “affordable” housing, as I’ve been saying for years, is not the least bit affordable – especially for taxpayers.

But there’s something even worse than tossing barrels of money at Canada’s largest city prior to an election call–with seemingly no fiscal oversight.

The Rapid Housing Initiative (RHI) program mandates that the homes be constructed within 12 months. On the surface, that seems like a good way to make sure the city (which operates at a snail’s pace) gets things done.

But it’s not the least bit fiscally efficient.

As has repeatedly occurred since the program was announced, the bureaucrats have used the tight timelines to sole-source the work as well as to overpay for buildings and for the construction itself.

The official mantra is that city officials had no choice but to sole-source the services required because of the “emergency” due to COVID. They continually maintain that COVID has left people without housing even though more than $200-million has also been spent housing people in fancy hotels like the Novotel on the Esplanade.

Take the first 99 units of modular housing built in downtown Toronto and in Scarborough late in 2020. City officials claimed they needed to sole-source the job to Horizon North – based in Vancouver, B.C. – because of pressures from COVID and the need for immediate housing.

Abi Bond, executive director of Toronto’s housing secretariat, came to Toronto from Vancouver in early 2019, where Horizon North was used for their modular housing builds.

As I quickly found out there were other Ontario suppliers who could have built the same pre-fab units at 2.5 times less the cost. At 350-square-feet, Horizon North’s off-the-shelf design cost taxpayers $600 per square foot.

But excuses were just that — excuses. After a tendering process lasting much of last fall and which closed Nov. 30, city officials decided to give the second phase to NRB Modular Solutions — which is Horizon North under a new name.

One supplier said his company didn’t make the city’s Roster of Approved Service providers and was never able to find out which manufacturers made the list.

“So much for transparency in the spending on this critical, but extremely expensive, program,” he said.

Meanwhile, supposedly feeling flush from their pot of RHI funds, the city paid $94.9 million to buy an entire building at a prime location in downtown Toronto (877 Yonge St. for those who know the city) in April of this year.

The building – which tragically forced all of its senior residents out in 2019 and sat empty for more than a year– is to be converted into 252 affordable homes.

The whole transaction has been extremely secretive.

But according to real estate and corporate documents, the building was transferred to a numbered company for $2 on May 3 of this year. Not $2 million. No. Two dollars.

That numbered company – 2692518 – is KingSett Capital, one of Canada’s leading private equity firms.

Documents also show that the $94.9-million was four times the building’s 2016 appraised value of $24.1-million. The city paid $513 per square foot during the height of the pandemic.

That’s not all. Extensive renovations are underway on 127 of the units, the work completely sole-sourced.  The city’s executive director of the Housing Secretariat Abi Bond refused to give the budget – indicating doing so would compromise the tendering process for the next 125 units.

Toronto’s bureaucrats and politicians seem not to care what they spend to get the job done in a semi-timely manner (all of the builds have been delayed so far).

They constantly claim, highly disingenuously, that no Toronto tax money is going into the construction. What they mean is no property tax money.

As we know, there is but one taxpayer.

But when the tap is flowing from our debt-ridden federal government, with precious little oversight, it doesn’t matter to our politicians or bureaucrats how much gets wasted or what connections get the jobs.

What does matter is that the government has something to show at election time. “Your tax dollars at work!”