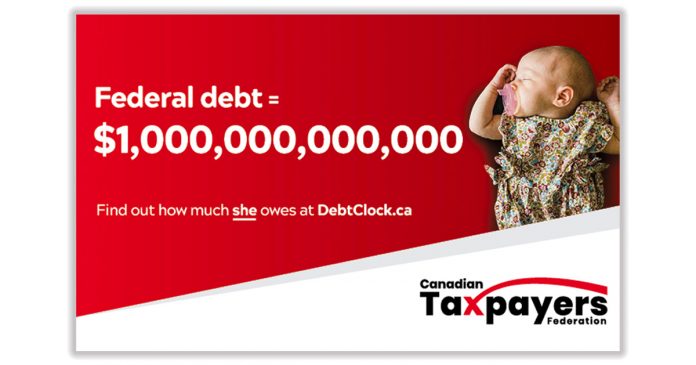 A campaign by the Canadian Taxpayers Federation (CTF) hopes to make Canadians aware of how much debt the Liberal government has accrued on their behalf.

The cross-country initiative will include physical billboards and social media ads that seek to warn Canadians about the country’s growing debt.

“Deficit spending is out of control and we’re pushing politicians to be honest about how they’re going to pay back the $1-trillion debt,” said the CTF’s Federal Director, Franco Terrazzano.

“More deficits mean more debt that Canadian kids and grandkids will need to pay back. Politicians need to rein in their deficit spending so future generations aren’t weighed down by soaring government debt.”

Billboards are expected to appear in Vancouver, Calgary, Winnipeg, Toronto, Ottawa and Montreal, while social media ads will be broadcast to numerous communities.

When broken down based on each person’s individual share of the federal debt, Canadians can expect to pay about $29,000 per person for the government’s reckless spending.

“Politicians owe taxpayers the truth about how they are going to pay for this $1-trillion debt and the truth is taxpayers are going to get clobbered if politicians don’t tighten their belts. Interest charges on the debt siphon away billions that can’t go to health care or lower taxes,” said Terrazzano.

Under the Liberal government’s watch, Canada’s deficit has also grown as a result of reckless spending.

According to the Parliamentary Budget Officer, Canada will not be able to get out of a deficit until 2070 due to the Liberal government’s spending programs.

“Overall, it paints a picture of unsustainability for finances, both federal and provincial combined,” Parliamentary Budget Officer Yves Giroux said.

“And that is the big elephant in the room that nobody seems to be worried about or wanting to address.”