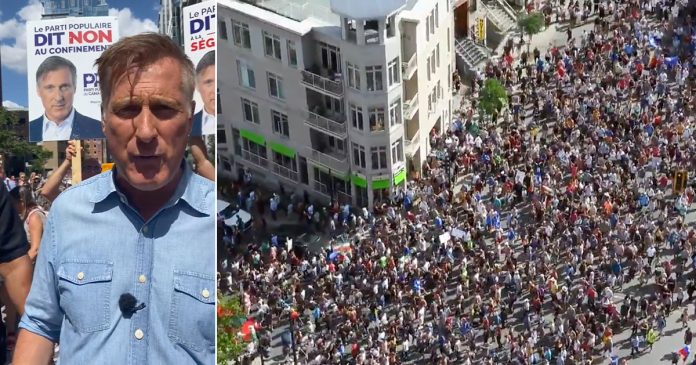 Bernier has been a regular staple at anti-lockdown rallies in the past. Earlier this year the PPC leader was arrested while attending a similar rally in Manitoba.

“Vaccine passports are inefficient, unconstitutional and immoral. They will not prevent the spread of the virus because we now know that vaccinated people can also spread it,” Bernier told True North in an emailed statement.

“They would create two types of citizens with different rights. I don’t want to live in a ’show-me-your-papers’ society. If that happens, whether you are vaccinated or not will be irrelevant. Everyone will lose their freedoms and suffer in a surveillance and police state.”

Earlier this month, the provincial government revealed that all Canadians and travellers in the province will be required to show proof of vaccination status by way of a digital pass.

Under the strict regime, unvaccinated Canadians would be denied access to “non-essential” public spaces like restaurants, sporting events, bars and elsewhere.

Following the announcement, Quebec Premier François Legault stated that he would not hold a debate in the National Assembly over his decision to force Canadians onto a vaccine passport system over fears of “conspiracy theories.”

“Over the past 18 months, there has been an unprecedented series of attacks against our rights and freedoms, including our freedom of speech and our democratic process for adopting laws,” said Bernier.

“Mr. Legault is attacking both by dismissing opposition to his vaccine passport plan as a ‘conspiracy theory’ and by not allowing a debate on such a fundamental issue. It’s simply unconscionable. He’s acting like a typical despot.”

Event coordinator Jonathan Hamelin told CP24 that the protests would continue as long as the provincial government refuses to hold a public debate.

Although a majority of Quebec’s opposition parties have indicated support for a vaccine passport program, they are calling on Legault to bring the matter to the legislature.