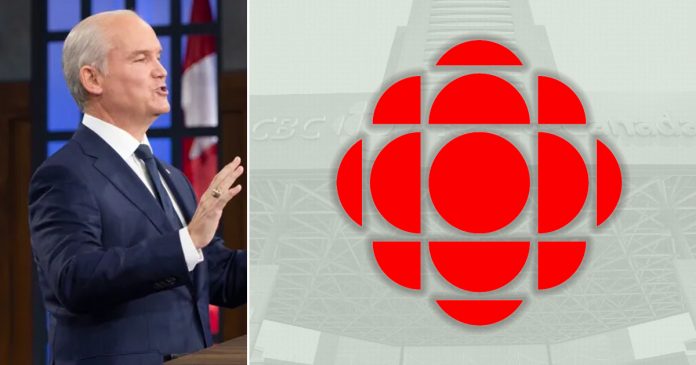 A Conservative government under Erin O’Toole will evaluate CBC’s place in the Canadian media landscape.

The Conservative Party of Canada’s 2021 platform, “Canada’s Recovery Plan,” lays out a three-pronged plan for CBC:

The platform says the review would “assess the viability of refocusing the service on a public interest model like that of PBS in the United States, ensuring that it no longer competes with private Canadian broadcasters and digital providers.”

The pledge is more modest than what O’Toole promised last year during his leadership campaign. O’Toole’s leadership platform promised to privatize both CBC News Network and CBC’s English television within a first mandate, as well as rollback and ultimately end funding for CBC Digital.

“I think it’s unfair for the private sector media outlets that are struggling to transition to digital, that are struggling to gain advertising revenue to see the state competing against them, particularly in areas of digital, where the CBC increases have actually made it harder for the private sector and then Mr. Trudeau creates a media bailout fund to deal with some of the challenges he has caused,” O’Toole said.

Under the new Conservative platform, Radio-Canada would have to forgo user fees for its online streaming service, to ensure it is not competing with private francophone media outlets.

CBC receives over $1.2 billion in government funding each year.

A Conservative government would also put an end to the Trudeau government’s $600 million media bailout, arguing that having “approved” media “undermines press freedom, a vital part of a free society.”