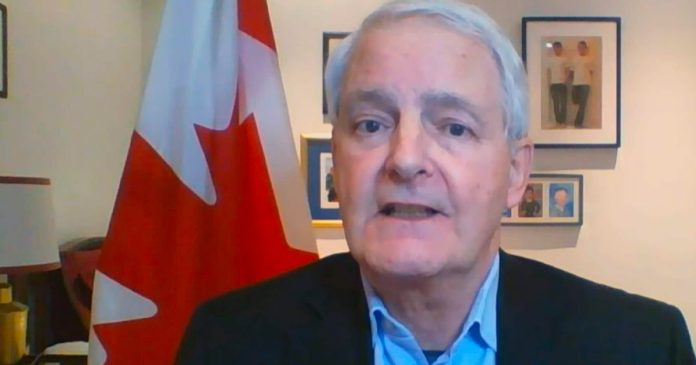 The Liberal government is not ruling out the possibility of recognizing the Taliban as the legitimate government in Afghanistan.

During an appearance on CBC’s Power & Politics, Liberal Foreign Affairs Minister Marc Garneau claimed that his government will “wait and see” how the Taliban behaves before making such a determination.

“I would say to you that it’s early days. Right now we want to see what happens. The country has essentially surrendered to the Taliban, the Taliban is saying that it wants to run this government but we’re going to wait and see, it’s too early to answer that question,” Garneau told CBC’s Katie Simpson.

“We have to see how they behave since they have taken over the country. Certainly, their behaviour was totally unacceptable for the short time that they were in charge as the Russians left about 20 years ago, so we will wait and see.”

According to Public Safety Canada’s official listed terror entities list, the Taliban is a terror groups that “uses terrorist tactics, including the extensive use of Improvised Explosive Devices (IEDs) and suicide attacks, to further its political objectives.”

Other countries including the US and the UK have stated that they do not believe that a Taliban government should be recognized internationally.

Over the last week, the Taliban has effectively been able to steamroll through Afghanistan, ultimately capturing the nation’s capital, Kabul, over the weekend as the remaining US troops withdraw from the country.

The quick takeover by the terrorist forces has led to several countries, including Canada, scrambling to evacuate citizens and any diplomatic staff remaining in the country.

When asked about Canada’s response to the crisis, Prime Minister Justin Trudeau claimed that his government is ready to resettle thousands of Afghans seeking to escape the country.

“We have Canadian Armed Forces assets deployed in the region staging out of Kuwait, including aircraft,” said Trudeau.

“We have to recognize the situation is extremely fluid right now, and exceedingly dangerous. We’ve seen the Taliban take control of the country. We need to make sure that the safety of those brave women and men in the Canadian Armed Forces who are doing this work on behalf of Canadians and on behalf of Afghans, are done safely.”

In response to Trudeau, Conservative Party Leader Erin O’Toole accused the prime minister of “doing nothing” to evacuate trapped Afghans.

Despite Trudeau’s claims, a recent report by the Toronto Sun has indicated that the Liberal government has been stalling on its evacuation promises despite demands for expediency by the Canadian military.