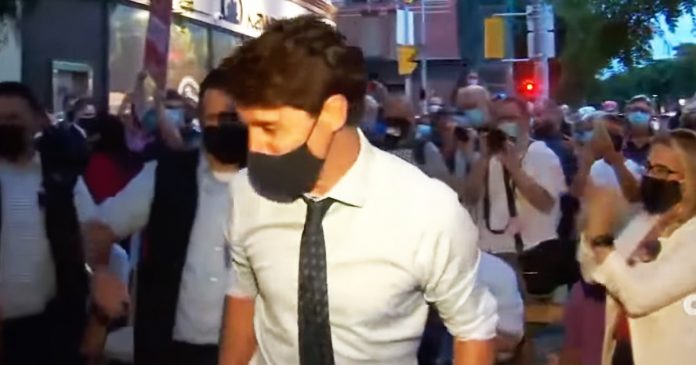 Ontario, which is in the third stage of its reopening plan, caps outdoor gatherings at 100 people. Trudeau appeared before a crowd of “several hundred” in the lakefront town Monday evening.

The Liberal party did not respond to a request for comment, but a spokesperson for the Haliburton, Kawartha, Pine Ridge District Health Unit, whose jurisdiction includes Cobourg, confirmed that the 100-person gap for gatherings remains in place.

The spokesperson declined to comment on the specific event, noting the health unit “does not have a role in reviewing or approving plans for public gatherings.”

Trudeau delivered his remarks masked on a local cafe’s outdoor patio, but hundreds of supporters and numerous protesters gathered, without any social distancing, on the street and sidewalk.

In April, police in Cobourg charged four protesters after 30 individuals gathered for an outdoor anti-lockdown protest. No charges have been laid in connection with Trudeau’s event.

Trudeau was met with jeers by people protesting mask and vaccine mandates. Liberal supporters reportedly told one of the protesters, an immigrant, to “go back to Afghanistan.”

Canada’s chief public health officer, Dr. Theresa Tam, has said the country is in the midst of a “fourth wave” of the COVID-19 pandemic, adding that “cases are plotting along a strong resurgence trajectory.”

Conservative leader Erin O’Toole and NDP leader Jagmeet Singh have both criticized Trudeau for calling an election despite his previous pledge to not do so until the pandemic was over.

The 44th general election will be held Sept. 20.