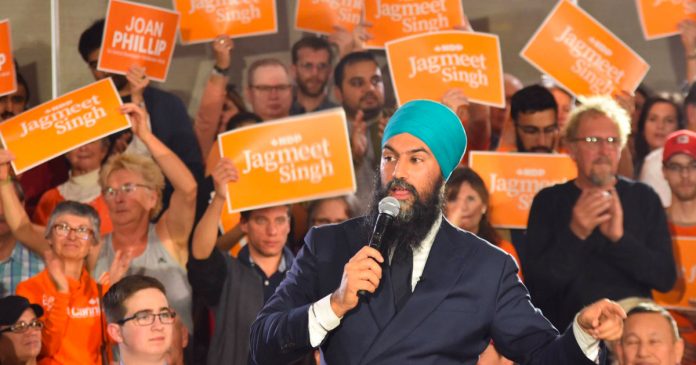 The Canadian Taxpayers Federation (CTF) is calling on the NDP to show proof that it had paid back the Canada Emergency Wage Subsidy (CEWS) it had collected.

Ahead of the upcoming election, CTF Federal Director Franco Terrazzano called out the party after it had recently proposed to force businesses that took the CEWS and yet gave their executives bonuses to return the money.

“Businesses shouldn’t be fattening their C-suites while taking tax dollars, but it was also wrong for political parties to help themselves to the wage subsidy meant from struggling businesses,” wrote Terrazzano in a press release.

“It’s great to see the NDP calling on these businesses to pay the wage subsidy back and taxpayers are looking forward to confirmation that the NDP is paying back the subsidy as well.”

NDP Leader Jagmeet Singh made the announcement on Tuesday while speaking to reporters at a campaign stop in Toronto.

Reports from the time noted that the NDP continued to collect CEWS payments until at least November 2020 despite having one of the best years in fundraising since the last election in 2019.

Additionally, the Liberals, Conservatives and the Greens also collected CEWS. The Bloc Quebecois were the only party to abstain from cashing in on the subsidy.

As noted by the CTF, the NDP like all other federal parties already receives tax credits for political donations and reimbursements during elections which collectively cost taxpayers millions each election year.

“Many Canadians were worried about their jobs during COVID-19, but I don’t think too many people were laying awake at night worried about a shortage of political attack ads,” said Terrazzano.

“Parties already receive special taxpayer treatment and it’s important that they pay the wage subsidy back because they clearly didn’t need it.”