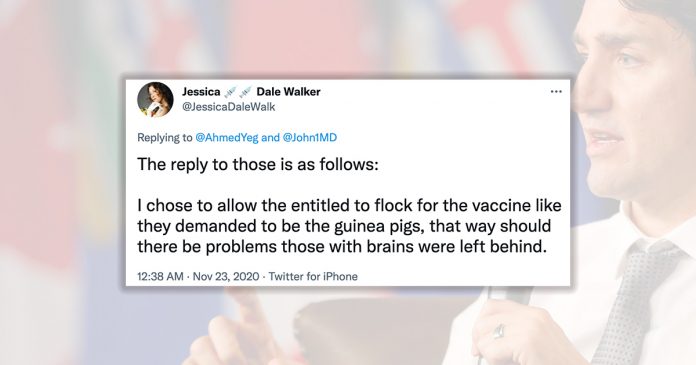 The Liberal candidate for Calgary Nose Hill suggested on her personal Twitter account last year that those who were the first to take the then-newly-developed COVID-19 vaccine were “entitled” and “guinea pigs.”

Jessica Dale-Walker, who was acclaimed by the Liberals in the Alberta riding Tuesday, made the comments in response to a Twitter thread about those hesitant to get the novel vaccine right away being accused of being anti-vaxxers.

“The reply to those is as follows: I chose to allow the entitled to flock for the vaccine like they demanded to be the guinea pigs, that way should there be problems those with brains were left behind,” Dale-Walker tweeted on November 23, 2020.

By November 2020, Pfizer-BioNTech had first submitted its emergency use authorization for its mRNA vaccine in the US. Several vaccines were also already being developed at the same time by Moderna and others.

True North reached out to Dale-Walker on social media to give her an opportunity to clarify the past statements but did not hear back.

In a separate tweet dated March 13, 2020, Dale-Walker suggested that conservatives and capitalists should be required to pay $20,000 to receive a COVID-19 vaccine, while for everyone else it should remain free.

“So in other words before giving the Vaccine (sic) two questions should be asked. Are you a capitalist? And Are (sic) you a conservative? A yes answer to either will cost $20,000 for the vaccine. A no answer to both is free with a lollipop,” tweeted Dale-Walker.

“Vaccines are a safe and effective tool to prevent the spread of COVID-19 and I encourage everyone to get one. As the shadow minister for health I fought hard to get the Liberals to fix their mess on procuring vaccines and get them to Canadians as fast as possible,” Rempel Garner said. “Right now, the Liberals should be working to improve access and education for those who haven’t received one. This candidate’s comments are bizarre and unhelpful to that cause.”

On March 13, 2020, Dale-Walker tweeted that closing borders in response to a pandemic would be “economic suicide.” In other tweets, Dale-Walker refers to herself as a “socialist,” and also decries capitalism.

Liberal Leader Justin Trudeau has accused Conservatives and Rempel Garner herself of spreading misinformation.
During an exchange in the House of Commons in March, Trudeau claimed that the Conservatives said that the COVID-19 pandemic wasn’t real and that people shouldn’t be wearing masks. In reality, a True North fact check found Trudeau’s statements to be false.