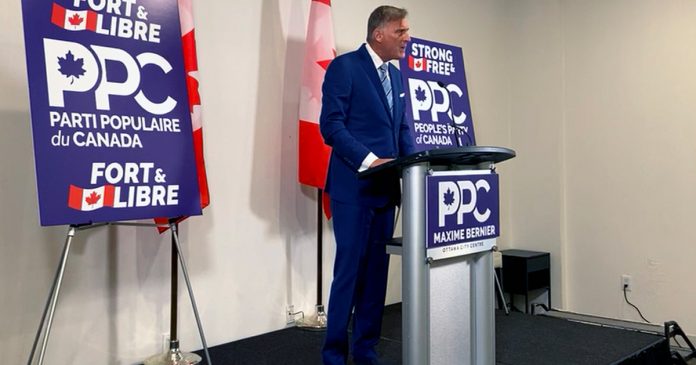 Unlike other political parties, the People’s Party of Canada (PPC) will not play a “vote-buying game” this election.

PPC leader Maxime Bernier announced on Monday that the PPC will be campaigning on the same platform they did in the 2019 federal election, which includes a promise to not introduce any new government spending programs.

“[The] platform is based on clear and unchanging principles: Individual freedom, personal responsibility, fairness, and respect,” said Bernier. “It puts Canadians first.”

At an Ontario campaign event on Tuesday, Bernier accused the other political parties of making “costly and unrealistic promises to bribe Canadians and buy their vote.”

“We know many of these promises are just lies and that the next government will not keep them. This bidding war is also the reason why the government keeps getting bigger and keeps controlling more of our economy and our lives, year after year,” Bernier said.

To constrain government and promote the free market, the PPC platform states they would eliminate all corporate subsidies and other inefficient government interventions, including bailouts, abolish the personal capital gains tax and reduce the corporate income tax rate by 5%.

“Spending cuts will include: corporate welfare ($5B-$10B), foreign development aid ($5B), CBC ($1B), equalization payments, and funding for programs which are provincial or municipal responsibilities,” the PPC platform states.

The PPC plan to end media bailouts is similar to Conservative’s leader O’Toole’s promise to remove $500 million in federal subsidies for the press and review $1.2 billion in annual CBC-TV’s English language service funding.

In the 2019 campaign, the PPC polled 294,092 votes and did not elect an MP. Bernier first formed the PPC in 2018 after narrowly losing the 2017 Conservative leadership race and leaving the party.