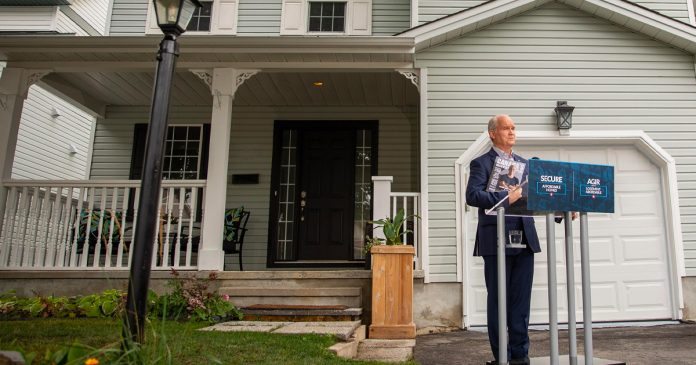 The Conservative’s housing plan will “give all Canadians a chance to build the life they dream of,” according to leader Erin O’Toole.

“We have a housing crisis in Canada. The supply of homes to own as well as to rent is not keeping up with our growing population,” said O’Toole at a press conference on Thursday.

In the past 50 years, Canada’s population has risen from 22 million to 38 million. This increased demand but a lack of supply has caused a significant increase in prices.

The homeowners’ replacement cost index, which is related to the price of new homes, rose at its fastest rate in July 2021 since 1987, according to a report released Wednesday by Statistics Canada.

In April 2021, the average Canadian home price reached $723,500. Single-family homes in Toronto now cost more than $1 million, and homes in Vancouver are just under $2 million. From 2005 and 2020, the annual average of the Canadian Real Estate Association’s monthly Seasonally Adjusted Composite MLS House Price in Canada has increased from $255,625 to $609,892.

“Foreign investors are also making the situation worse; they are bidding up prices, and in some cases, they are sitting on their investments,” according to O’Toole.

“This throws up barriers to young families looking for more space for their kids, people who found a job and want to find a home, and retired empty nesters who are trying to downsize,” he said.

To address this issue, O’Toole plans to ban foreign investors from buying homes in Canada unless they plan to live or move here. He will instead encourage them to invest in “purpose-built rental housing.”

To help Canadians afford homes, the Conservatives plan to “develop a new market in 7 to 10-year mortgage terms to provide stability both for first time home buyers and lenders.” The party will also change the mortgage stress test and insurance requirements to make it easier to qualify for financing.