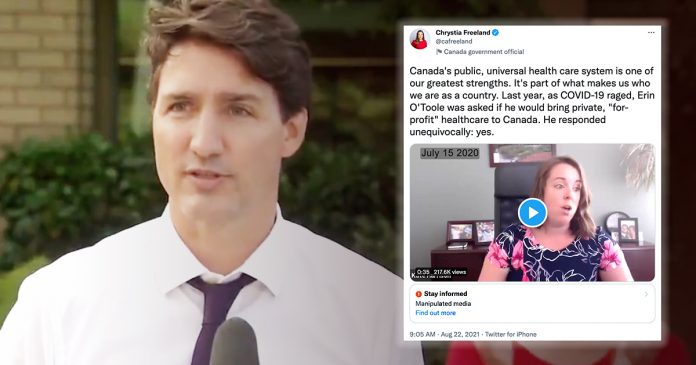 Liberal Party Leader Justin Trudeau stood by a doctored and manipulated video posted by Chrystia Freeland on Monday, falsely claiming that she had published the edited clip of Conservative Party Leader Erin O’Toole “in its entirety.”

“What’s really important here is that in the middle of a pandemic Erin O’Toole came out unequivocally in support of private, in terms of for-profit healthcare. We posted the entire interview in its entirety and I encourage all Canadians to take a look to see what Erin O’Toole has to say about what he sees in the future of healthcare,” Trudeau told reporters.

Over the weekend, Twitter posted a “manipulated media” warning to one of Freeland’s posts.

The clip is from an interview O’Toole gave during the 2020 Conservative leadership race in which he gives his views on Canada’s healthcare system.

A doctored version of the interview was posted by Freeland’s Twitter account with the false claim that O’Toole would bring “private, “for-profit” healthcare to Canada.”

“Canada’s public, universal health care system is one of our greatest strengths. It’s part of what makes us who we are as a country. Last year, as COVID-19 raged, Erin O’Toole was asked if he would bring private, “for-profit” healthcare to Canada. He responded unequivocally: yes,” Freeland’s tweet claimed.

The video was deceptively edited to exclude a portion in which O’Toole explicitly states that he supports access to universal healthcare while also supporting private options for Canadians.

“We need to ensure universal access remains paramount,” O’Toole says in the omitted portion of the interview.

Interview host, Kate Harrison, addressed the debacle online saying that she was “disappointed” with the excluded context of the interview.

“As the person who asked the question, I’m disappointed to see the video was manipulated to exclude important context,” said Harrison before posting the interview in its entirety.

O’Toole responded to the doctored video on Monday by re-asserting his commitment to universal healthcare in Canada.

“Let me be perfectly clear. I 100% support our public and universal health care system,” said O’Toole.

“In fact, it’s been the backbone we’ve relied on through the pandemic and the frontline workers in it.”

The controversy also prompted a response from the Conservative Party who are calling for an immediate investigation into the matter.