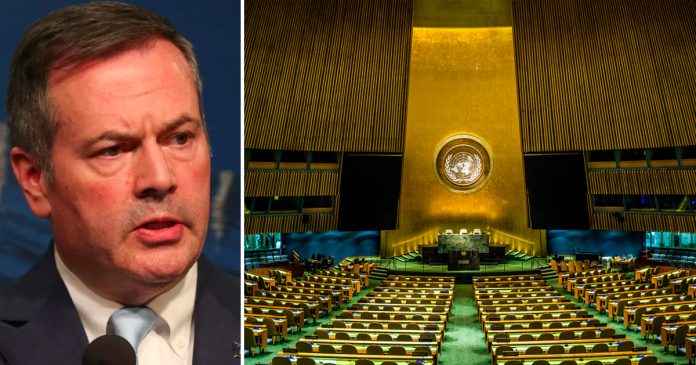 The Alberta government is speaking out after a United Nations report alleged that Premier Jason Kenney’s inquiry into anti-Alberta energy campaigns made violence against climate protesters possible.

The report cites the Alberta government under a section on “Vilification, smear campaigns and disinformation.”

The document claims that the public inquiry launched by the Kenney government in 2019, “helped create a context” where violence and even killings against environmental activists “become justified, normalized and enabled.”

“The inquiry targeted many organizations advocating for an end to fossil fuel usage and a net zero economy. Such attacks create a chilling effect on individuals’ and groups’ ability to exercise their rights to freedom of peaceful assembly and of association. They also help create a context in which the physical attacks discussed above become justified, normalized and enabled,” the UN report claims, referencing a preceding section on “Physical attacks, killings and intimidation.”

The report provides no evidence to substantiate its claims that the public inquiry led to any violence or attacks against climate protesters.

Upon being presented with the report’s allegations, a spokesperson for the Alberta government told True North that the claims were “absurd.”

“The allegations in the report are patently ridiculous. Freedom of peaceful assembly is constitutionally protected in Canada – it is part of the highest law of the land in one of the world’s great liberal democracies,” said Kenney spokesperson Christine Myatt in an emailed statement.

“The same certainly cannot be said of many of the UN Human Rights Council members that commissioned this absurd report.”

On July 30, Alberta Inquiry Commissioner Steve Allan delivered his final report on anti-Alberta energy campaigns to Alberta Energy Minister Sonya Savage. The 600-page report has yet to be released to the public.