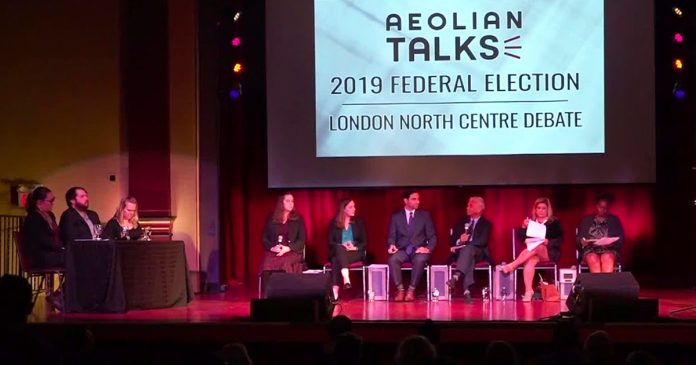 Federal election candidates in London, Ontario’s four ridings must be fully vaccinated to participate in the city’s only televised debates.

According to an invitation sent to candidates the debates’ host and broadcaster, a local Rogers station, the venue at which the debates are being filmed, Aeolian Hall, has a vaccination requirement to enter the premises.

“At this time, Aeolian Hall’s policy to enter the building is that you need to be double vaccinated,” the email says. “Please let us know if you’re unable to attend based on this requirement. Aeolian Hall will operate on the honour system with vaccination status, so this means you will not need to show proof of vaccination.”

London North Centre People’s Party of Canada candidate Marc Emery, who is not vaccinated and does not plan to be, tweeted a screenshot of the invitation, saying the policy will preclude him from debating, despite being a candidate on the ballot.

“Only double Vax (sic) citizens can participate in democracy,” he wrote, vowing to protest the “outrageous apartheid” outside the venue while the debate is taking place.

“Any candidate forum or debate that attempts to bar unvaxxed candidates or citizen voters, I will not participate,” Emery tweeted. I will instead hold a boisterous 90 minute rally with bullhorns outside the doors of any venue that tries to exclude the NoVax population from attending.”

The Rogers coordinator for the debate did not respond to a request for comment. It’s not clear whether candidates unable to attend in person will be permitted to participate remotely.

A page on the Aeolian Hall’s website says all patrons must be “double vaccinated before attending a concert,” though it notes this is not required for those with medical exemptions or children 12 and under. The policy makes no reference to conscientious or religious objections to the vaccine.

A PPC candidate in the neighbouring riding of London–Fanshawe says he objects to the policy, but will still be attending under the exemption listed on the venue’s website.

“I think they are trying to purposefully exclude the PPC, but I will be attending,” said Kyle Free, who disclosed he is not yet vaccinated. “My goal is to get in and get our message out there.”

Vaccination is not mandatory for the general population in Ontario, which has thus far not implemented any vaccine passport system.

Historically, the London Rogers debates invite all registered candidates to participate. The PPC received 2.4% of the vote in London North Centre in the 2019 election.