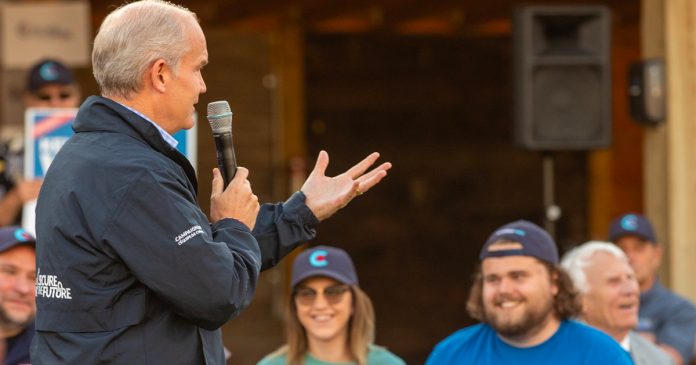 Government-mandated lockdowns during the COVID-19 pandemic have resulted in a mental health crisis in Canada and Conservative leader Erin O’Toole believes the federal government should play a vital role to alleviate the suffering.

“The mental health crisis is the epidemic within the COVID-19 pandemic,” stated O’Toole at a Wednesday press conference.

O’Toole’s Conservatives propose to build a mental health system that “will serve all Canadians.” He claimed that his plan involves the “largest increase in federal health spending in generations.

If elected on September 20, the Conservatives would ”massively boost health transfers to the provinces to 6% annually, doubling the Liberal commitment and representing $60 billion more health care dollars over the next ten years.”

The goal is to “invest in mental health as the health priority it is with the goal of providing enough funding through health transfers for an additional million Canadians to receive mental health treatment every year and cut the waitlists for help.”

Although the transfers to provinces would be given unconditionally, O’Toole said he would partner with provinces to ensure the spending stays on track to tackle mental health issues.

To ensure consistent help is available across the nation, O’Toole said he would start a three-digit nationwide suicide prevention hotline as well as “provide $150 million over three years in grants to nonprofits and charities delivering mental health and wellness programming.”

Lockdowns have had severe consequences on Canadians’ mental health. Restrictions on social gatherings and the economic toll of lockdowns have exacerbated pre-existing mental health conditions and left many feeling isolated and struggling to stay afloat financially.

An unprecedented number of one in ten Canadians have contemplated suicide since the beginning of the pandemic, according to a survey conducted by the Canadian Mental Health Association in September 2020. Prior to the pandemic, the rate of suicidal ideation was lower at 2.6%