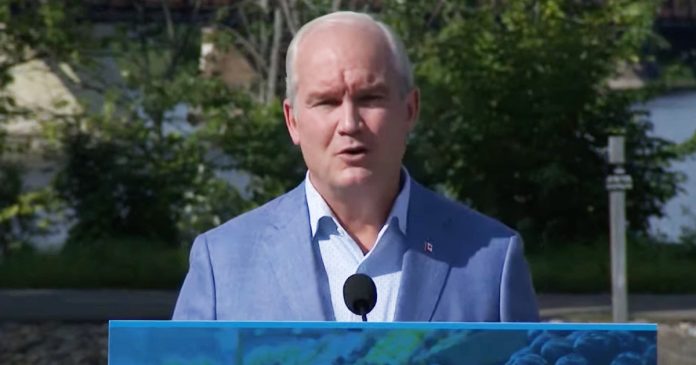 The Conservative platform commits to “promoting free speech on campus,” but Erin O’Toole isn’t saying whether this involves withholding federal funds from universities and colleges that fall short of accommodating “the range of perspectives” his pledge aims to protect.

At a campaign stop in Fredericton, N.B. Saturday morning, O’Toole spoke of “encouraging” a culture of free speech on campuses, but didn’t detail any enforcement mechanisms.

“Free speech is a fundamental pillar of our democracy, and that’s why we have to make sure we can have a debate of ideas, an informed and positive debate about the future of our country,” O’Toole said. “I think Canadians want to see a healthy and respectful debate. I think the same extends to campus settings.”

The Conservatives “Secure the Future” platform pledges to “work with the provinces and territories to ensure that public post-secondary institutions accommodate the range of perspectives that make up Canada through a commitment to free speech and academic freedom.”

While public universities in Canada are predominantly funded and regulated by provinces, they do receive significant federal support through a number of grant programs.

In the Conservatives’ 2019 platform, then-leader Andrew Scheer said universities without “an expressed commitment to free speech and academic freedom” would be ineligible to receive federal research grants, such as through the Social Science and Humanities Research Council of Canada and the Natural Sciences and Engineering Research Council.

O’Toole twice declined to answer whether he would take this approach, instead speaking about the value of open debate on campus.

“I learned myself that when you’re challenged – when I went to law school – you think about the other side, you think about the other perspectives, and sometimes it will reinforce your perspectives, sometimes it will give you balance,” O’Toole said. “We encourage a lot of the universities to look at what the University of Chicago has done to keep that campus setting an open place for respectful debate to grow the education environment for students and to grow our democracy.”

The Chicago principles, which came out of a 2014 University of Chicago report, affirmed free expression as “an essential element of the University’s culture,” safeguarding against attempts to clamp down on “offensive” or “disagreeable” speech.

Shortly after Ontario Premier Doug Ford’s government came to power in 2018, public universities and colleges were directed to “develop, implement and comply with a free speech policy that meets a minimum standard prescribed by the government and based on best practices from around the world.”

While the directive said institutions who did not comply “may be subject to a reduction in operating grant funding,” the government ultimately said all public postsecondary schools met the standard.