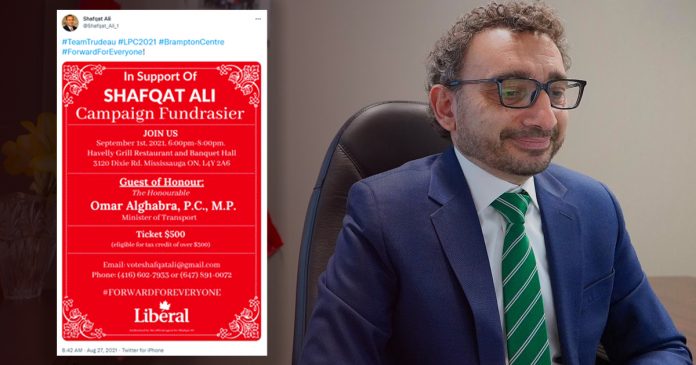 The Conservative Party of Canada has requested Conflict of Interest and Ethics Commissioner Mario Dion look into Canadian Minister of Transport Omar Alghabra for appearing to engage in a conflict of interest.

The Liberal candidate for Brampton Centre Shafqat Ali said in a now-deleted tweet sent on Friday that he would be holding a campaign fundraiser at the Havelly Grill Restaurant and Banquet Hall on Wednesday. The tweet said Alghabra would be the guest of honour.

Tickets to the event cost $500. Tickets were eligible for a tax credit of more than $300.

The Conflict of Interest Act seeks to prevent conflicts between private interests and the duties of public office holders. Public office holders are prohibited from providing preferential treatment to any person or organization based on the identity representing it.

The Conservatives said in a tweet on Friday that what Alghabra is doing could be construed as a conflict of interest.

“It might be an election, but Omar Alghabra is still selling access to Justin Trudeau’s government,” said the Conservatives. “Conservatives will be asking the Ethics Commissioner to initiate an investigation.”

Ali and Alghabra could not be reached for comment in time for publication.

Dion can investigate any public office holder or former official at the request of a member of the House of Commons or Senate, or he can do so on his own initiative if he believes a person has contravened a particular section of the Conflict of Interest Act.

This incident is the latest in investigations into Liberal politicians over the last few years.

Prime Minister Justin Trudeau has been found guilty twice for violating the Conflict of Interest Act. The first time was in 2017 for travelling to the private island owned by the Aga Khan, and the second time was in 2019 for attempting to influence former minister of justice and attorney general Jody Wilson-Raybould.