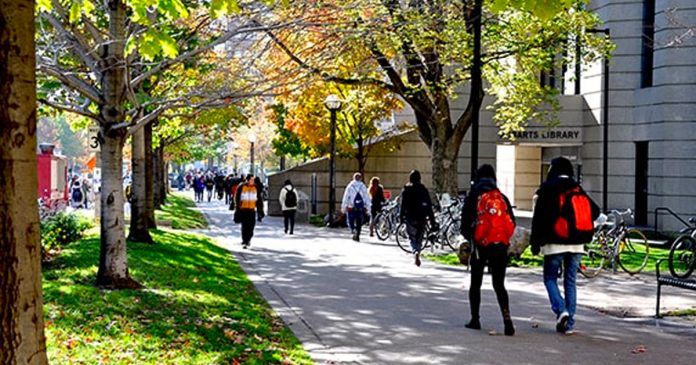 A group of over 20 students at the University of Toronto have signed an open letter expressing their concerns about the university’s campus-wide COVID-19 mandatory vaccination policy.

“We believe that a student’s medical history and medical decisions should not be the basis for differential treatment by an academic institution,” the letter reads. The authors of the letter call the mandate “nonscientific, discriminatory, and unethical.”

“Some of us have been vaccinated, some of us haven’t, in general we’re all very pro-choice,” explained main author Benjamin Gabbay, a 25-year old Master’s of Music student at the University of Toronto.

Because of the vaccination mandate, Gabbay is taking a year off from his master’s program. However, many other students gave in and got a vaccine they didn’t want or need because they weren’t willing to disrupt their education.

“We’ve come across a lot of students who just felt completely desperate, and didn’t know what to do, and they feel they don’t trust their institution anymore. They don’t know how to respond to this coercion, these mandates, especially if they don’t want the shot,” said Gabbay.

Like most universities in Ontario, the University of Toronto intensified their campus vaccination policy last week so that individuals would no longer be provided with the alternative option of rapid testing.

“Members of our community who are unvaccinated and do not have an approved exemption are not permitted to come to campus,” the university says on their website.

A rapid testing option will only be given to those granted exemptions, and exemptions will only be available for medical reasons or other grounds protected by the Ontario Human Rights Code – not for individuals who have made a personal health decision to not get the vaccine.

According to Gabbay, Ontario universities are ramping up security guard presence on campus, with guards stationed at front entrances, cafeterias and student service centres.

“They’re setting the ground for a ‘show me your papers’ type of return to school,” he said. “They’ve been clamping down, they’re really trying to figure out how to absolutely stamp out any kind of non-compliance.”

Many of the signatories to the open letter have now partnered with Children’s Health Defense Canada and the Constitutional Rights Centre to launch a lawsuit against the university.

“There are legal actions underway – at this zenith that we’ve reached, that’s the only way to go from here,” said Gabbay.

“Many of us are part of that. But that will take a long time, it won’t be a silver bullet.”

Similarly, a group of 32 students, parents, faculty and staff at the University of Waterloo have written an open letter to the university asking them to repeal the campus-wide mandatory vaccination policy.

The main author of the letter, biochemistry professor Michael Palmer, stated that a lawsuit was underway.

“There’s no objective reason for imposing any such strict mandates,” Palmer told CTV News. “The lawsuit will challenge these unconstitutional mandates in court.”

Two students at Seneca College are also suing their institution over the campus vaccine mandate, and the Constitutional Rights Centre has threatened to sue Western University.