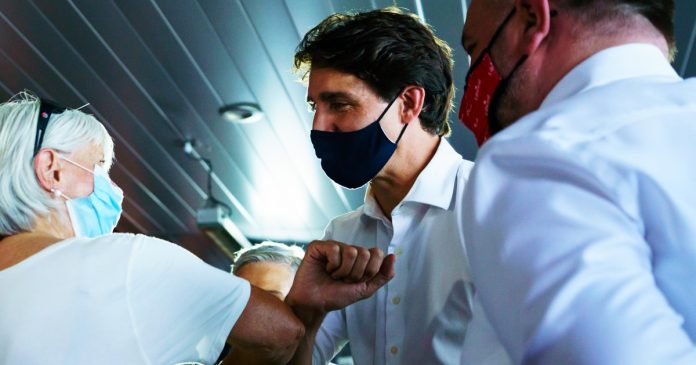 Canada’s health-care system needs a refresh. But rather than having a thoughtful and nuanced conversation about the best ways to improve our health-care system for all Canadians, the Liberal party and its friends in legacy media are pushing a superficial debate based on partisanship, semantics and fearmongering.

The Liberals were giddy over this alleged bombshell. The only problem is that it wasn’t true.

The video was deceptively edited, and Twitter quickly slapped a warning label on it for viewers stating that the video was manipulated.

Imagine that. The Liberal party, the party that has for years been warning about the dangers of “fake news” and advocating for the government to regulate and censor online speech, was caught red-handed pushing a fake and misleading video.

This is peak Liberal hypocrisy and top-notch irony.

But rather than acknowledge that they went over their skis on this one, the Liberals have instead doubled down and continued to push the storyline behind their fake news video.

In a selfie video that screamed desperation, Trudeau used his serious voice to warn Canadians that O’Toole wants to bring “choice” to health care.

“Erin O’Toole confirmed he wants to bring private, for-profit health care to Canada. He said he supports choice in health care,” said Trudeau in his dumbed-down and condescending message.

On what planet is “choice” a bad thing? The Liberals, after all, are the party that claims to be “pro-choice.”

The strange Liberal notion that Canada has a pure 100% government-run health-care system is a myth.

Instead, what we see in Canada is that the part of our system covered by the Canada Health Act (services provided by a physician or in a hospital) is rigid and restrictive when it comes to choice and competition, while the part of the system not covered (dental, prescription drugs, mental health, long-term care, etc. — which make up the 55%) has inadequate public support for those who need it.

O’Toole’s plan seeks to address these shortfalls, first by allowing more public-private partnerships in the delivery of service in the first category and by providing more taxpayer money to help those in need in the second category.

In fact, O’Toole has pledged to boost the annual growth rate of health transfers to the provinces from 3% to 6%, which would “inject nearly $60 billion into our health-care system over the next 10 years.”

So while the Liberals are alleging the Conservatives will “cut” health care, the opposite is true. O’Toole has pledged more money — more government taxpayer money as well as allowing more private investments in healthcare — than the Liberals.

And yet, many in legacy media are all too happy to carry water for the Liberals and help push their misleading storyline.

The Canadian Press issued an ironically named “truth test” where it dissected O’Toole’s claim he supports universal public healthcare by interviewing two advocates who support the Liberal position. CP concludes O’Toole “can’t have it both ways.”

This isn’t journalism and it isn’t the truth. It’s partisan activism masquerading as journalism.

Canadians deserve better health care, but in order to get there we need to have an honest conversation about the strengths and weaknesses of our system.

Canadian health care is already mostly private. Anyone, in journalism or in politics, who tries to tell you otherwise is manipulating the truth.