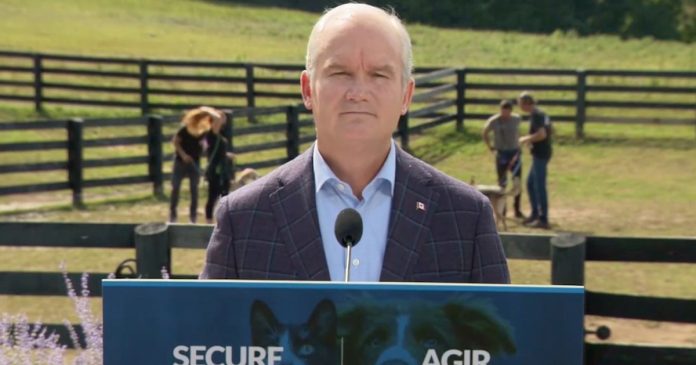 A Conservative candidate or member of parliament who doesn’t support the entirety of the party’s platform will not be allowed to sit with the Conservatives, Erin O’Toole said.

In a statement Sunday night, O’Toole said he expects his team to fall in line behind the climate change plan he proposed in April in particular.

“I want to make it very clear: this is the plan I am running on. It’s the plan Conservatives are running on. All of them,” he said. “If I am elected prime minister, it is the plan I will implement. If there are candidates who don’t support it—or any other part of Canada’s Recovery Plan—they won’t be sitting in the caucus of a future Conservative government.”

O’Toole’s statement came amid Liberal criticism of Conservative candidate and longtime Ontario MP Cheryl Gallant, who in a video earlier this summer warned of an impending “climate lockdown.”

“I’m proud to run on Canada’s Recovery Plan, in its entirety,” Gallant wrote.

While seeking the Conservative party’s leadership last summer, O’Toole spoke often about his support for free votes from MPs in his caucus.

“I have been quite clear on this both in the last leadership race and in this one, that the fundamental freedoms of MPs and the rights of free votes on issues of conscience is a fundamental part of our party,” O’Toole said in a 2020 interview with pro-life political action group RightNow.

In that interview, O’Toole vowed to defend the Conservative policy of free votes, and took aim at then-rival Peter MacKay for saying he would whip cabinet votes.

Yet speaking to reporters in King City, Ont. Monday morning, O’Toole did not answer a question about which issues MPs in a Conservative caucus would be able to vote freely on in light of his Sunday night statement.

“We are running on a plan, Canada’s Recovery Plan, which the country needs to get back on its feet,” he said. “It’s exactly what the country needs – jobs, accountability, mental health leadership, preparing ourselves for the next pandemic, and a commitment to getting the budget balanced over the next decade. Everyone will be focused on that plan, and a positive campaign.”