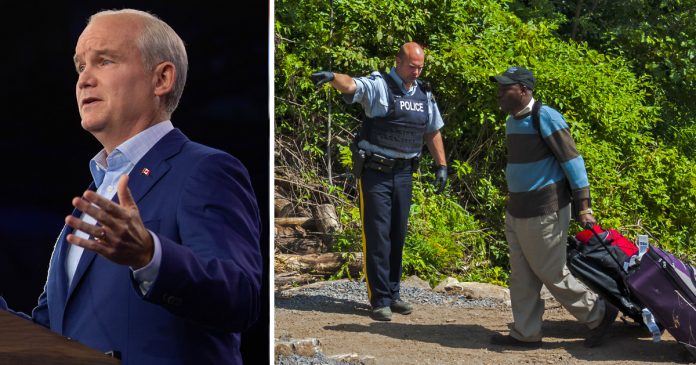 A Conservative government headed by Erin O’Toole intends to stop illegal border crossings that were rampant prior to the COVID-19 pandemic.

Canada’s Conservatives will close illegal entry points – the most infamous being Roxham Road in Quebec – along with the loophole in the Safe Third Country Agreement that allows asylum seekers to come to Canada illegally from the United States, says a section of their platform described as “Securing our Border.”

“We will close the loophole in the Safe Third Country Agreement to end illegal border crossings… we will end the practice of the RCMP and the CBSA acting as unofficial welcoming committees, assisting with illegal crossings,” says the Conservative policy platform.

This influx of illegal refugees was prompted by a January 2017 tweet from Liberal leader Justin Trudeau inviting the world’s self-selected refugees to come to Canada.

#WelcometoCanada, he announced in the hashtag.

It was an attempt gone terribly wrong by our woke open-borders Prime Minister to embarrass former President Donald Trump, who’d signed an executive order banning immigrants from a select few terrorist-harbouring countries to enter the U.S. In doing so, Trump was trying to put a lid, at least temporarily, on homegrown terrorism.

The Safe Third Country Agreement stipulates that any asylum seeker is supposed to make their claim in the first safe country in which they land.

But enabled by Trudeau’s magnanimous Twitter offer – which was viewed millions of times and made headlines all over the world – the illegal border crossers took advantage of a loophole that permitted them to make a claim if they crossed an illegal port of entry like at Roxham Road.

Who can forget the pictures of migrants taking pre-arranged taxis for the 30-minute ride from Plattsburgh, N.Y. to mere metres from the illegal border point, where they’d walk the rest of the way rolling their suitcases.

It became such good business for the taxis in Plattsburgh they started calling themselves border shuttles.

At the border crossing, they were greeted by RCMP and Canadian border security agents – the latter the same Canadian government staff who have aggressively targeted travellers at airports with obscene fines of $5,000 or more if they refused to go to a COVID quarantine hotel.

It became so controversial that the federal government started referring to them as “irregular migrants” instead of what they truly were – illegal border crossers.

Border security minister Bill Blair did nothing to stem the tide of illegal crossers which according to the federal government’s own statistics totalled almost 60,000 between the spring of 2017 and June of this year.

The same statistics show the numbers only began to dwindle down to a few hundred every quarter once the borders were essentially shut due to the pandemic.

During their peak, the illegal crossings took a tremendous toll on the resources of cities like Toronto – whose officials had to scramble to shelter the illegal border crossers and offer them social assistance and other support.

In fact, the Liberal government never had a plan for these people other than to dump their care and welfare on the city and the province.

City of Toronto officials jumped into panic mode to find hotels to house them after they were temporarily housed in residences like those at Humber College.

By the end of 2018, some 33% of Toronto shelter spaces were occupied by these asylum seekers and the city was forced to set up pre-fab tent structures to house their homeless.

During 2019, the city of Toronto spent an outrageous $75-million to house and feed the illegal border crossers – and only $45-million came from the feds to cover the costs.

In addition to the exorbitant costs, it simply was unfair to those who came to Canada through legal means.

At Christmas in 2019, I spoke to Varun Muriyanat and his wife Neeunu Mary who jumped through hoops for over three years – spending $27,000 they didn’t have – to immigrate from India. Unlike the illegal border crossers, they did everything by the book and had no help from an army of resettlement experts and no government assistance once they landed here.

The Conservative platform also indicates an intention to work with officials south of the border to set up joint patrols at and near high traffic points on the land border to deter illegal crossings.

In their platform released this week, the Liberals make no specific mention of the fate of illegal entry points like Roxham Road.

But in a statement on World Refugee Day this past June, the responsible minister Marco Mendicino stressed Canada’s “unwavering commitment” to resettle refugees, boasting that while other countries closed their doors, Canada welcomed “nearly half of all refugees resettled around the world” during the pandemic.

He spoke of redoubling their efforts to help “even more refugees and asylum claimants” to find safety in Canada.