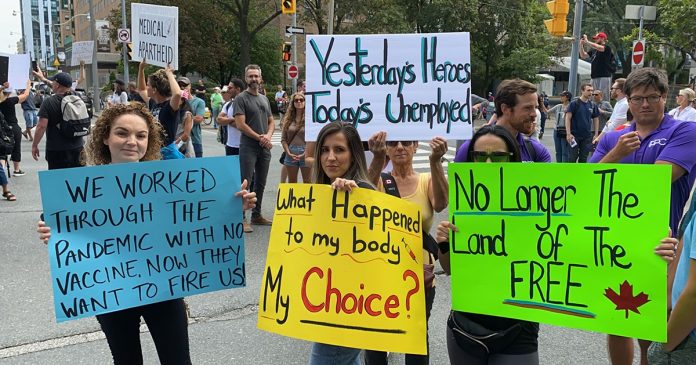 Thousands of Canadian nurses and healthcare workers took to the streets Wednesday to protest against vaccine mandates and take a stand against “medical tyranny.” The protests, organized by Canadian Frontline Nurses (CFN), were held in 18 cities across Canada on the same day the Ontario government announced its plans to impose a vaccine passport in the coming weeks.

CFN aims to “restore our freedoms and rights as Canadian citizens and reinstate the four ethical principles of autonomy, beneficence, nonmaleficence, and justice within nursing.”

In Toronto, approximately 1,000 demonstrators gathered outside the University Health Network Hospital and marched towards Queen’s Park.

“Nobody has a right to suppress our choice over our body,” said one protester, Sandra Kyrzakos, who argued vaccine passports are intended to coerce people into getting vaccinated.

“This is about standing up for our rights and freedoms because this is just the tip of the iceberg. If we allow this, I can only imagine what it will be like for our children. This is the hill we all need to be willing to die on.”

Kyrzakos was protesting with a sign saying mandatory vaccines are unconstitutional.

Nurses and healthcare workers expressed dismay over their treatment by the government.

“We were heroes at the height of the pandemic, and now we are told we will lose our jobs if we do not comply and get the vaccine,” said one protester who asked not to be named.

Many protesters did not wish to speak on record out of fear of reprisals in the workplace, especially as more Ontario hospitals push vaccine mandates for their staff.

Numerous protesters claimed the vaccine mandates violate section seven of the Charter of Rights and Freedoms which states “everyone has the right to life, liberty and security of the person and the right not to be deprived thereof except in accordance with the principles of fundamental justice.” They believe that the mandates will infringe on their liberty and security.

Protesters expressed anger towards Justin Trudeau’s decision to backtrack on his earlier promise not to enforce vaccine mandates.  Many worry that they will be treated as “second-class citizens” if they do not comply due to Ontario’s forthcoming vaccine passport regime.

“We do not want to be chained under Trudeau’s laws, and we will fight to the end,” some protesters chanted.