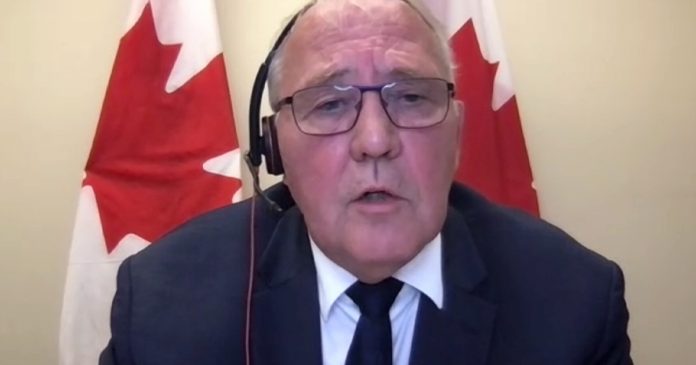 During a Friday afternoon press conference, Liberal Candidate Bill Blair made the misleading claim that due to budget cuts by the former Conservative government, police had to shut down investigation into organized crime in 2013.

Blair made the statement while fielding questions from reporters on the Liberal government’s performance on crime.

.@CBCRaffy points out to Blair that homicides dropped during Stephen Harper’s time and office and have increased while Liberals have been in power.

Blair says Harper pulled police funding in 2013, which shut down organized crime investigations (this is begging for a fact check).

“Homicides in Canada fell by 8% during the years Stephen Harper was in power and since your government came in, they started climbing up again. Last year there were 22% more homicides in Canada than when your government came into office, this is all according to Statistics Canada. So given this track record why would Canadian voters expect to be safer under a Liberal government?” asked CBC reporter Raffy Boudjikanian.

Blair provided no evidence to support his claims. pic.twitter.com/FEcWix3hxv

“In 2013 an extraordinary thing happened and frankly Mr. Harper and the Conservative government, which Mr. O’Toole was a member of that cabinet, pulled the rug out from underneath the police at that time and withdrew funding, literally hundreds of millions of dollars from the RCMP and border services officers,” said Blair.

“You know, I appreciate they were trying to balance the budget but frankly they made a terrible mistake, a tragic mistake, so we saw hundreds of organized crime investigations ending because the resources were no longer available. They shut down the thirteen integrated proceeds of crimes units that were in place across the country doing really important work holding organized crime to account. They basically got out of the business to save money.”

Blair provided no evidence to support his claims.

According to Public Safety Canada’s 2013-2014 progress report, Blair’s claim that “hundreds of organized crime investigations” were shut down is not accurate.

In reality, Public Safety Canada reported that it had exceeded and met performance targets for 2013 when it comes to combating serious and organized crime as well as detecting and investigating capital market fraud.

Additionally, Statistics Canada data on crime rates reveals that in 2013, the Crime Severity Index for all provinces and territories, except for Yukon and Newfoundland and Labrador, actually decreased nationwide.

“The CSI in Canada’s largest provinces, Quebec, Ontario and British Columbia fell in 2013 and as a result, these provinces recorded their lowest CSIs since 1998, when data for the CSI were first calculated,” wrote Statistics Canada.

The following year, in 2014, the Conservative government also boosted funding to the RCMP to combat organized crime with $91.7 million set aside in that year’s federal budget to be put towards tobacco trafficking units.