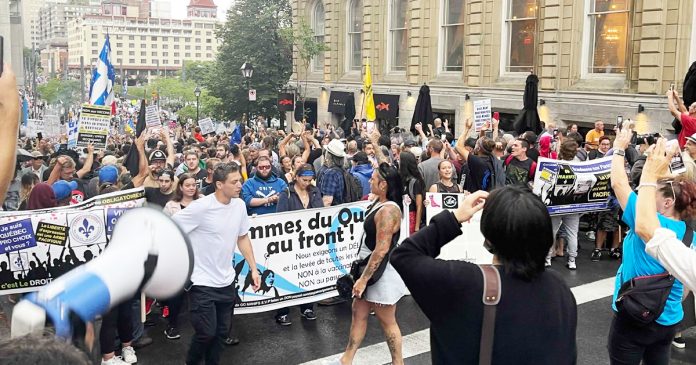 The rain didn’t stop thousands of Quebecers from taking to the streets on Sunday to protest against the Quebec government’s implementation of a vaccine passport system.

Holding signs that read “No to Medical Discrimination,” “Stop COVID Vaccine Propaganda” and “My Body, My Choice,” the protesters demanded an end to the province’s vaccine passports.

Quebec’s vaccine passport system, imposed Sept. 1, requires anyone in the province to show proof of vaccination to access businesses and events deemed “non-essential.”

According to Montreal Blog, the protest was organized by the Facebook group Québec Pro Choix and several mobilization groups from all over Quebec participated.

People’s Party Candidate for Notre-Dame-de-Grâce–Westmount David Freiheit, a popular YouTuber under the name Viva Frei, estimated there were more than 50,000 protesters.

“The protest spanned kilometres. Tens of thousands of people peacefully protesting [and] expressing themselves … with the discontent of the government with what has turned into a fundamentally undemocratic country,” Freiheit said in a video posted to Twitter.

Opposition parties in Quebec have denounced Quebec Premier François Legault’s decision to implement the vaccine passport without a debate in the legislature.

“I don’t want certain people – whom I won’t name – to come explain that there’s a conspiracy, it’s not good to be vaccinated, that in the end, we’re putting a microchip in people’s arms to follow what they’re doing, stories like that. I don’t think we need that in Quebec,” said Legault when asked why there has been no debate on the issue.