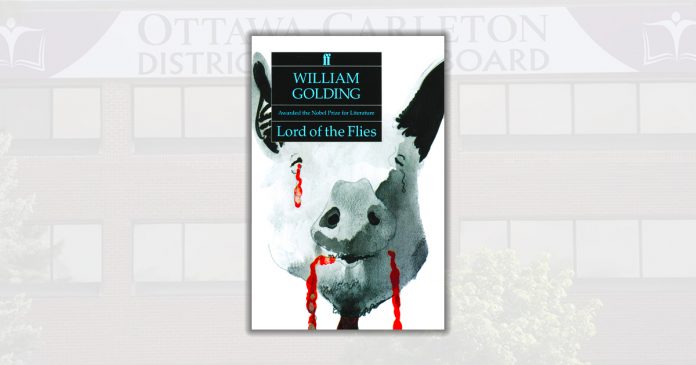 The popular novel Lord of the Flies by English novelist William Golding has been removed from the English curriculum of all Ottawa-Carleton District School Board (OCDSB) schools.

According to a report by the OCDSB’s Committee on Equity, the book was removed from the curriculum following an article written by a student activist in a local paper on how educators need to “stop favouring white authors” like Golding and the playwright William Shakespeare.

“Referencing The Lord of the Flies, (the student who wrote the article) noted that she does not need to learn more about White, male supremacy, which tells the story of a group of boys in a hierarchical order who fight for power and degrade one another,” the committee report explains.

“(The article) led to the removal of ‘The Lord of the Flies’ from the OCDSB English curriculum.”

Despite being removed from the curriculum, OCDSB Communications Coordinator Darcy Knoll told True North following the deadline given that the book “can still be taught” in schools and remains “an option of study.”

“Educators exercise judgement in determining which resources to use with a specific group of students at a particular time. Educators take into account the interests and lived experiences of students, and whether perspectives included in texts are meaningful and relevant, and the degree to which the resources meet the objectives of a course of study,” Knoll wrote in an emailed statement.

“Additionally, educators think of potential harm that can be created through use of particular texts and thoughtfully reflect on all these areas prior to text selection. Is this the best text to use? Are there alternatives? How do I ensure student voice?”

Lord of the Flies is a common staple in Ontario English classrooms, appearing in the curriculum of elementary schools and secondary schools across the province for generations.

While interpretations of the novel vary, a central theme in the work is a critique of power structures and societal inequalities.

The book removal is the latest in a wave of censorship by school boards intent on ridding their curriculum of “colonial” or “white-centered” influences.

The book burning was presented to the students in a video about burying “the ashes of racism, discrimination and stereotypes in the hope that we will grow up in an inclusive country where all can live in prosperity and security.”

“It is a gesture of reconciliation with the First Nations, and a gesture of openness towards the other communities present in the school and our society,” a spokesperson for the School Board told Radio-Canada.