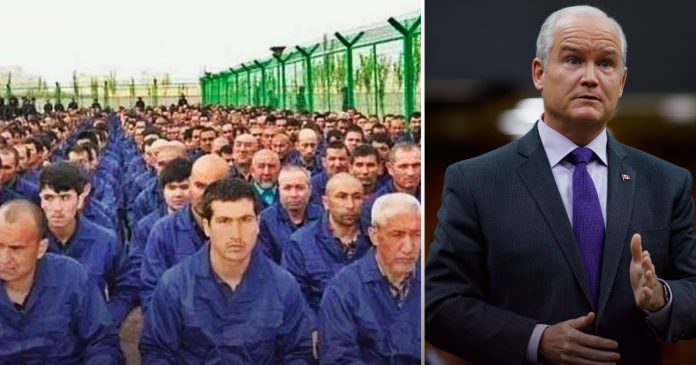 Conservative Party Leader Erin O’Toole pledged on Thursday that if elected his government would put an end to the import of goods produced through forced and enslaved labour.

According to a press release on the announcement, O’Toole singled out the Chinese Communist Party for its mass encampment of Uyghur Muslims.

“For years, we’ve known Uyghur slave labour is being used by China’s Communist regime in the Xinjiang Uyghur Autonomous Region to produce products like cotton, tomatoes, and solar panels for export,” said O’Toole.

“As prime minister, I won’t hesitate to act against this disgusting practice and ensure that the worst human rights offenders don’t profit from these abuses.”

The Conservatives pledged to revise supply chain legislation and regulation to enforce an import ban on goods produced through forced labour.

“Through legislation similar to that proposed in the Senate through Bill S-216, Canada’s Conservatives will ban the importation of any goods produced by entities or within regions which are known to employ slave labour,” a policy backgrounder states.

If passed, Bill S-216, or the Modern Slavery Act, would impose “an obligation on certain entities to report on the measures taken to prevent and reduce the risk that forced labour or child labour is used at any step in the production of goods in Canada.”

Canada’s allies, including the US and the UK, have passed similar laws including the July 2021 Forced Labour Prevention Act which was passed by the US Senate in July 2021.

According to Conservative critics, the Liberal government has done very little to punish China for its use of slave labour.

A recent report by the Globe and Mail found that Canadians were still able to purchase goods produced in the Xinjiang region where forced labour is common despite government measures requiring companies to attest that slave labour had not been used in the manufacturing process.