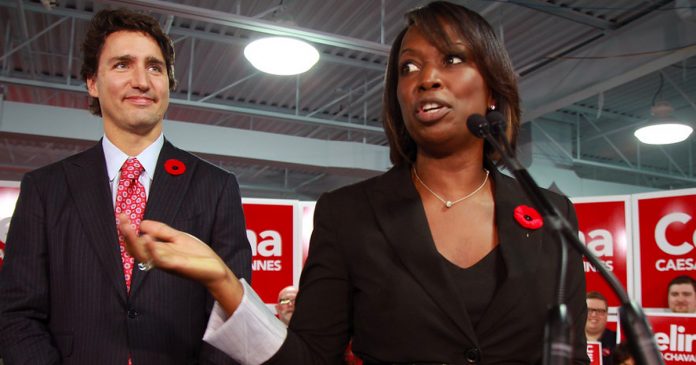 Former Liberal MP Celina Caesar-Chavannes said on Sunday that she will be voting for the Conservative candidate in her riding.

Caesar-Chavannes announced in an interview on “The West Block” on Global News that while she is a Liberal at heart, she has decided to vote for the Conservative candidate for Whitby Maleeha Shahid.

“I’ve never done that in my life,” said Caesar-Chavannes. “But at this particular time, maybe we have to think about doing things differently.”

The former Liberal MP said Canadians have the opportunity to take a different approach to politics this election by voting for the Conservatives. She hopes the Liberals will distance themselves from Prime Minister Justin Trudeau.

In 2019, Caesar-Chavannes resigned from the Liberal caucus citing conflict with the Prime Minister. She met with Trudeau on the same day former minister of justice and attorney general Jody Wilson-Raybould resigned from cabinet in the wake of the SNC-Lavalin scandal.

The SNC-Lavalin scandal saw Trudeau and the Prime Minister’s Office attempt to interfere with Wilson-Raybould’s decision to grant the company a deferred prosecution agreement for a criminal case. Conflict of Interest and Ethics Commissioner Mario Dion found Trudeau guilty on one count of improperly using his position to seek to influence.

Caesar-Chavannes said she cried when she read the excerpt of Wilson-Raybould’s new book.

“I was heartbroken because we keep continuing to reward bad behaviour from a prime minister that won a 2019 election, had a majority and a minority government for six years, and continues to say there’s more to do,” said Caesar-Chavannes. “I really think that rewarding bad behaviour is not something Canadians should do any further.”

Wilson-Raybould’s book, called “‘Indian’ in the Cabinet: Speaking Truth to Power,” will be released on Tuesday. Wilson-Raybould said in the description of her book that she will tell the full story of the SNC-Lavalin scandal.

When asked about Caesar-Chavannes’ comments on Sunday, Trudeau said at a press conference that he wishes her all the best.

“People have a really important choice to make in this election,” said Trudeau. “Mr. O’Toole wants to take Canada back, take it back to 1951, apparently.”