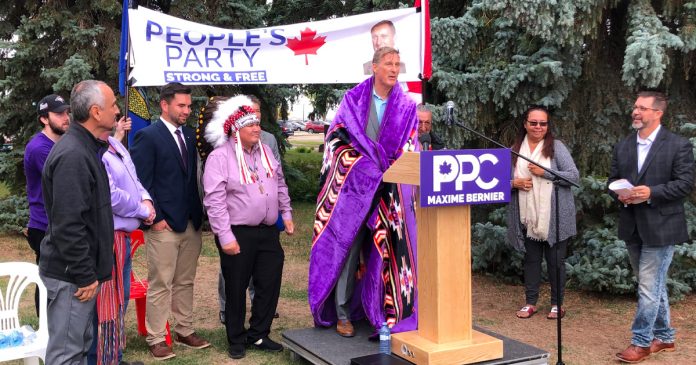 Papaschase First Nation Chief Calvin Bruneau said the PPC’s Indigenous platform is “on the right track,” particularly with Bernier’s commitment to abolish the Indian Act and address the drinking water crisis on reserves.

“We lost our freedoms over the years,” Bruneau said. “We’ve been living this for a good 150 years. And Canada in general, has only been experiencing that the last year. It’s something we definitely know something about. With this idea of having freedoms and freedom of choice, especially, that’s what we’ve got to do.”

At a Saturday afternoon press conference in Edmonton, Bruneau presented Bernier with a ceremonial blanket he said represents “health and wellness and good intentions.”

“According to treaty, we’re to be working together and sharing this land,” Bruneau said.

Bernier hosted the press conference alongside four Indigenous PPC candidates in the upcoming election, one of whom, Murray MacKinnon, is a member of Bruneau’s band.

“A PPC government is committed to seeking options to replace the paternalistic Indian Act, which keeps Indigenous peoples in a state of dependency and allows the federal government to control most aspects of their lives,” Bernier said Saturday, proposing a model that would “guarantee equal rights and responsibilities” to promote “self-reliance of communities.”

Bernier committed to ensuring Indigenous communities can benefit from resource and infrastructure projects, but said the real barrier to economic prosperity on many reserves is a lack of property rights.

“There’s not only natural resources. There are other resources also. There are entrepreneurs on reserves that are building businesses,” Bernier said. “It’s about giving them the opportunity to have real economic development by having the right policies. It’s not a top-down approach from Ottawa to the First Nation, and there’s a lot of other First Nations that don’t have any natural resources but are very successful.”

Bruneau said this idea can be controversial, but would ultimately be helpful.

“There are a lot of people that are opposed to it, but the thing is, if it could work on a reserve and people can own their land pretty much in perpetuity, I think that would help,” he said.